LINE is a Japan-based, cross-platform mobile messenger app with about 84 million monthly active users in its home market as of 2020. The service is operated by LINE Corporation, which is based in Tokyo. Created in response to the 2011 Great East Japan Earthquake, LINE was originally designed as an internet-based method of communication that did not have to rely on the, then-damaged, telecommunications infrastructure. Despite a strong mobile messenger competition in Asia, LINE clearly dominates the mobile messaging market in its home country. This dominant position is reflected by very high penetration rates across age groups in Japan. Further key markets for the messenger app are Taiwan, Thailand, and Indonesia.
LINE Corporation diversified its portfolio

LINE Corporation recorded a total revenue of approximately 227.5 billion Japanese yen in 2019. Although LINE started out as a messenger app, LINE Corporation has also expanded its operations into other areas, offering spin-off apps such as the online payment system LINE Pay, the music streaming service LINE Music, and the digital comic service LINE Manga. The company’s core business consists of advertising, communication, and content. The core business is complemented by the strategic business, which includes e-commerce and the sales of character goods. A look at the different segments shows that LINE Corporation generated more than half of its revenues in 2019 via advertising. Since the company offers a variety of services that depend on mobile devices, its business profited from the spread of smartphones in Japan during the 2010s.

Plans for the near future

While LINE Corporation previously operated solely as a subsidiary of the South Korean internet search giant Naver Corporation, in November 2019 it was announced that LINE Corporation would merge with Z Holdings Corporation, a SoftBank Corp. subsidiary that operates the popular web portal Yahoo Japan. Due to some delays because of the coronavirus (COVID-19) pandemic, the merger was completed in March 2021. Following the merger, Naver Corporation and SoftBank Corp. each hold 50 percent in the newly created A Holdings Corporation, which is a majority stakeholder of Z Holdings Corporation. The move aims to increase the companies’ competitiveness, especially against more financially affluent competitors from the United States and China. It is a part of an ongoing consolidation of internet companies in Japan, which combine strengths in order to improve their position in a global market that is increasingly dominated by the largest players, such as Google, Apple, Facebook, Amazon, and Alibaba. Among other things, it is planned to utilize LINE for social commerce, marketing, and telemedicine purposes.
This text provides general information. Statista assumes no liability for the information given being complete or correct. Due to varying update cycles, statistics can display more up-to-date data than referenced in the text.
Published by Statista Research Department, Jun 24, 2022

Most popular mobile messenger apps based in Asia 2021

Most popular mobile messenger apps based in Asia 2021

Most common reasons for using networking services (SNS) in Japan 2021 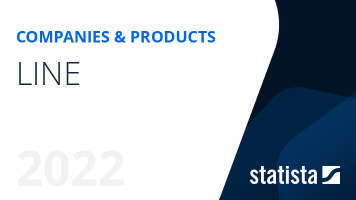 The most important key figures provide you with a compact summary of the topic of "LINE" and take you straight to the corresponding statistics.