Published by
M. Garside,
Jun 3, 2021
The mine production of the precious metal silver came to a global total of some 25,000 metric tons in 2020. The world’s largest silver producer is currently Mexico, with 2020 production amounting to 5,600 metric tons. Peru, China, Russia, and Chile are the next largest silver producers, while the countries with the largest silver reserves are Peru, Australia, and Poland. Silver is most often produced as a by-product of the extraction process of other metals, primarily lead, zinc, and copper.

The leading silver mining countries are concentrated in the Americas

Silver mining began approximately 5,000 years ago in modern-day Turkey. Prior to the Spanish conquest of the Americas, the center of silver mining was in Spain. However, for over 500 years now, the Americas have been an important source of silver. Today, of the ten largest silver producing countries, four are located in South America, and Mexico, the largest producer, is located in North America.

The total global supply of silver stands at around one billion ounces. About half of all silver demand worldwide is attributable to industrial applications. Other sizable segments go into investment, coinage, and the jewelry industry. Looking at the last four decades, the price of silver has shown a steady increase, reaching new record highs since 2010. The average London fixed price for one ounce of silver was a high of 35.12 U.S. dollars in 2011, dropping to 20.55 U.S. dollars in 2020.

In the following 6 chapters, you will quickly find the 31 most important statistics relating to "Silver". 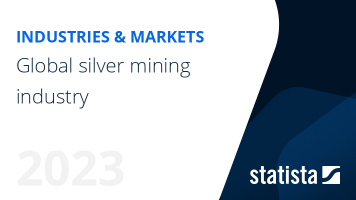 The most important key figures provide you with a compact summary of the topic of "Silver" and take you straight to the corresponding statistics.