Published by C. Textor, Mar 23, 2022
China, the world's most populous country, had a total population of 1.41 billion at the end of 2021 (not including Hong Kong, Macau, and Taiwan). However, the population growth decreased gradually over the last two decades and is expected to slow down further, with total population figures beginning to drop in the second half of the 2020s or even earlier.

After the founding of the People’s Republic of China in 1949, the Chinese population developed rapidly over the following decades. To counteract this explosion in population, the so-called one-child policy was introduced in 1979. Although the policy was effective in slowing down population growth, it was controversially discussed because of multiple negative side effects. One of those negative effects, the shift towards an older median age of the Chinese population, eventually caused the government to revise the policy. On October 29, 2015, the existing law was changed to a two-child policy and came into effect on January 1, 2016.

However, this policy shift did not seem to have a lasting effect on the birth rate: the total number of births in China increased for a couple of years, but then fell again considerably in 2018. In 2021, the population growth dropped to only 0.03 percent, most probably affected by the coronavirus pandemic. The aging society will lead to a rising old-age dependency ratio in China, which is expected to grow to 43.6 percent by 2050 from below 20 percent today. This means two working adults will statistically have to support roughly one person aged above 65 years.

Apart from population size, urbanization in China has gained momentum following the initiation of the reform and opening policy in 1978. By the end of 2021, nearly 65 percent of the Chinese population resided in cities and towns, a dramatic increase from less than 20 percent in 1980. In 2021, around 914 million people were living in urban areas of China while 498 million people lived in rural areas. The urbanization rate is generally higher in eastern and southeastern China which are economically better developed coastal regions, although the lesser developed western and central regions are keeping up in recent years.

The majority of the Chinese people live in the eastern provinces and municipalities of the country. The regions form a broad arc reaching from the northern city of Harbin through Beijing, Shanghai and all the way down to Guangdong. Guangdong is the most populous province in China with a population of approximately 126 million people by the end of 2021, followed by Shandong, Henan, and Jiangsu provinces with around 102, 99 and 85 million inhabitants respectively. The autonomous region of Tibet was the least inhabited region in the country with only 3.7 million inhabitants in 2021.

In the following 5 chapters, you will quickly find the 32 most important statistics relating to "Population in China".

The most important key figures provide you with a compact summary of the topic of "Population in China" and take you straight to the corresponding statistics.

Demographics in the Asia-Pacific region

Megacities in the Asia-Pacific region 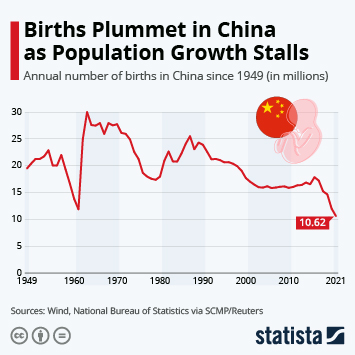 annual number of births in China 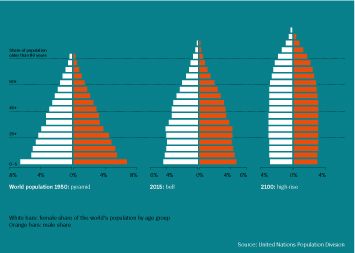