Alphabet Inc. is a multinational conglomerate headquartered in Mountain View, California. It was established in 2015 as part of a corporate restructuring of Google and now acts as a parent and holding company for the global tech giant and many other companies previously owned by or tied to Google. While the announcement of this major organizational shift was initially met with skepticism, Alphabet’s most recent financial reports indicate various positive trends and developments. In 2022, the parent entity had a market cap of 1.79 trillion U.S. dollars, making it the most valuable U.S.-based internet company, ahead of e-retailer Amazon. The firm generated over 257.6 billion U.S. dollars in revenue in 2021, while also seeing its highest annual net income to date at 76 million U.S. dollars.

Most of Alphabet’s revenue is generated through Google, the global search giant whose brand value reached 458 billion U.S. dollars in 2021. According to Alphabet, the Google segment includes the company’s main products, such as “ads, Android, Chrome, hardware, Google Cloud, Google Maps, Google Play, Search, and YouTube.” In 2021, these avenues generated revenue of approximately 256.7 million U.S. dollars and thereby accounted for over 99 percent of Alphabet’s total annual revenue. But while Google remains the company’s key business and most relevant revenue stream, Alphabet also regulates a diverse portfolio of other subsidiaries. Collectively listed as Other Bets, this operating segment spans an array of industries, from robotics and transportation to healthcare, life sciences, and anti-aging. As these products and technologies are mostly unrelated to Google’s core business, they were separated from the powerhouse’s primary operations in 2015 and contained under the roof of Alphabet instead. By doing so, Google wanted to narrow the company’s business scope and create a sufficient scale of management. Revenue from other bets had been increasing steadily since 2016.

Many of Alphabet’s subsidiaries include earlier stage technologies that are striving for innovation but also require a long-term view geared at long-term returns. Some of the segment’s main drivers of growth include health-tech firm Verily, Alphabet’s healthcare and disease prevention research unit, and autonomous vehicle technology firm Waymo. To fuel the development and success of its emerging businesses, the parent company spent over 31 billion U.S. dollars on research and development in 2021. Concurrently, Alphabet ranked among the leading patent owners in the fields of machine learning and artificial intelligence (AI).

Another crucial line of expenditure is allocated to lobbying the United States government. In 2020, Alphabet rounded out the top three internet lobbying spenders in the U.S., having spent around 8.66 million U.S. dollars on lobbying activities. Lobbying plays a crucial part in the tech heavyweight’s ongoing fight against wide-ranging scrutiny into its practices. In recent years, lawmakers and regulators have increasingly weighed new antitrust and privacy rules to moderate the power of large internet service providers like Google and, ergo, Alphabet. As Google’s parent company was aptly named after the Latin term for “investment above benchmark” by their own accounts, its future advancements will undoubtedly remain in the focus of public and political attention and criticism for years to come.
This text provides general information. Statista assumes no liability for the information given being complete or correct. Due to varying update cycles, statistics can display more up-to-date data than referenced in the text.
Published by Statista Research Department, Nov 30, 2022

Brand value of the most valuable brands worldwide 2022 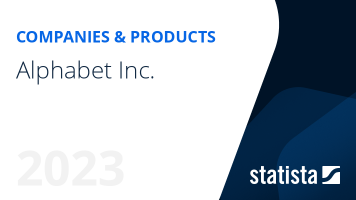 The most important key figures provide you with a compact summary of the topic of "Alphabet Inc." and take you straight to the corresponding statistics.