Published by Statista Research Department, May 31, 2022
The confectionery industry is comprised of three segments: chocolate confectionery, sugar confectionery and gum products. All three categories are characterized by the use of a significant amount of sugar and sugar substitutes. Confectionery is generally low in micronutrients, but rich in calories and carbohydrates.
According to industry figures, the global confectionery market was led by the Western European region, based on generated sales. To address health concerns, better-for-you products have been on the rise. As a result of the demand for naturally sourced colors, the clean label trend has hit the confectionery category. In order to satisfy this growing demand, many food companies announced plans to reformulate their products to exchange artificial ingredients and simplify the ingredients lists.

In the U.S. market, confectionery sales amounted to nearly 36.4 billion U.S. dollars in 2016 and are expected to reach 52.6 billion U.S. dollars by 2025. Based on retail-tracked sales for the 52 weeks ended December 30, 2018, the confectionery market in the U.S. was led by two large confectionery manufacturers: The Hershey Company and Mars. Chocolate products manufactured by Hershey include well-known brands such as Kisses and Reese’s Peanut Butter Cups. A 2019 consumer survey found that approximately 46.75 million U.S. consumers indicated that they mostly eat Reese's Peanut Butter Cups.

In the following 4 chapters, you will quickly find the 29 most important statistics relating to "Confectionery industry in the U.S.". 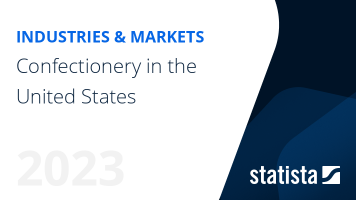 Go to report Confectionery in the United States
Top Seller

The most important key figures provide you with a compact summary of the topic of "Confectionery industry in the U.S." and take you straight to the corresponding statistics. 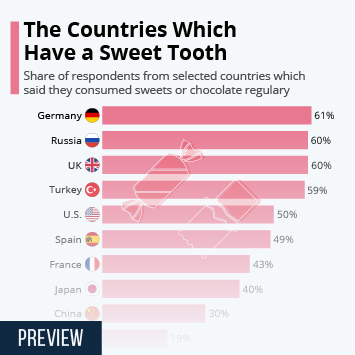 The Countries Which Have a Sweet Tooth 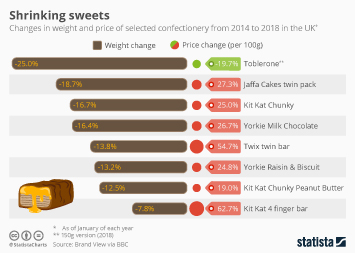