As populations become more reliant on the internet and social media, usage of online networks rises, and user numbers continue to increase. Social media usage in Canada has experienced years of constant growth, and the number of social network users in the country now stands at 34.47 million. Canada has a social network penetration rate of 89 percent, making it one of the world’s most connected online populations.

How popular is social media in Canada?

The internet provides users with many options for online activities, and Canadians choose to spend a lot of their online time on social networks. Overall, social media is the third most popular online activity in Canada, after e-mail and online banking. More people use the internet for social media access than they do for reading news and shopping. Furthermore, the vast majority of social media users in Canada said they use it on a daily basis, whilst 16 percent said they use it several times a week. Daily time spent on social media has increased over the past few years. As of early 2022, users in Canada spent an average of approximately one hour and 53 minutes per day on online networks.

In 2021, social media users aged between 25 to 34 years made up the largest share of users in Canada, accounting for over 25 percent of its audience. Women of this age group were slightly more likely to use social networks than their male counterparts.

Which platform is Canada using the most?

It is no surprise that Facebook is the most used social network in Canada, with 78 percent of social media audiences in the country using the platform. Instagram and TikTok, although popular, are still no match for Facebook, with 53 percent and 31 percent of social media users in Canada utilizing them, respectively. Although there are currently 29.44 million Facebook users in Canada, year-on-year user growth is expected to slow. However, Facebook is projected to reach over 35 million Canadian users by 2027. Additionally, Facebook Messenger is the most used instant messaging service in Canada.

Although user numbers and penetration rates for Facebook leave other platforms falling behind, overall public opinion of Meta as a company, and Facebook as a platform, are mixed in Canada. In 2021, 49 percent of Canadians reported having a positive view of Facebook, whilst 40 percent held a negative view. Additionally, when asked if they believed whistleblower Frances Haugen’s claims regarding Facebook’s recent failings, 64 percent of Canadians said they believed the allegations that Haugen made against the company were true. 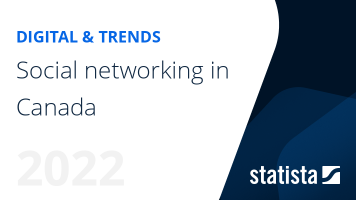 The most important key figures provide you with a compact summary of the topic of "Social media usage in Canada" and take you straight to the corresponding statistics.