It is no surprise that social media usage in the United Kingdom has been rising each year, and that popular platforms have managed to maintain their high user numbers. However, newcomers to the market have tapped into niches and created new trends, giving well-established social media giants competition for their user’s attention.

Which social media platform is the most used in the United Kingdom?

In early 2022, the total number of social media users in the United Kingdom stood at 61.67 million. WhatsApp was the most used social media service in the UK as of 2021, with almost three-quarters of the country using the instant messaging app. Facebook ranked closely in second position, followed by Facebook Messenger, Instagram, and Twitter.

In the UK, social media is most popular amongst Gen Z and Millennials. One quarter of all social media users fall into the 25-to-34-year age group, with 12.8 percent being women, and 12.4 percent being men. Overall, roughly 90 percent of people of this age in the UK have a profile on a social media network. Although most popular social media sites require users to be at least 13 years of age to create an account or profile, children below this age are regularly using social media services, and a large number have their own profiles.

How do people use social media?

The UK population’s overall usage of social media reveals just how integrated it has become into the everyday lives of the vast majority. A survey found that as of March 2022, 73 percent of respondents used social media every day, whilst just three percent said that they never used it. Although it has many purposes, social media is often used as a news source. In 2021, an online survey conducted in the UK found that 36 percent of UK news consumers said they used Facebook as a source of news, making it the third most popular source after broadcasters BBC and ITV. Additionally, 16 percent of social media users used Twitter as a source of news every week, whilst 14 percent used WhatsApp.

As Facebook was launched in 2004, its success in terms of user numbers and reach is strongly linked to the fact that it was one of the first online networks of its kind. While it is often thought that Facebook is used mostly by older generations, and is not liked so much by younger audiences, it still has twice as many teen users than Instagram. As of April 2022 in the UK, 736 thousand teens were using Facebook, compared to 305 thousand using Instagram. Currently, there are 46.58 million Facebook users in the UK, which accounts for 68 percent of the country’s population. Although Facebook has a public reputation as an online network for older generations, people aged 25 to 34 make up a quarter of all users.

How much time is spent on TikTok?

TikTok had 8.9 million users in the UK in early 2022, and has experienced steady growth in user numbers throughout the past few years. The platform has taken its place amongst the likes of YouTube and Facebook, and was the most used social media app in the UK in 2021, with users spending on average 27 hours per month on the service. TikTok’s design, usability, and entertainment style - focusing mainly on short videos - have filled gaps in the market which is highly appealing to younger audiences. Approximately 53 percent of TikTok users in the UK are girls and women between the ages of 13 and 24 years.

Social media brands in the UK

Video platform YouTube ranked first in terms of being the most well-known social network in the UK, followed by Facebook and Instagram. Although Twitter’s awareness rate amongst social media users in May 2022 was 92 percent, just 34 percent of respondents reported using the micro-blogging service. With Elon Musk’s interest in the company, Twitter spent a considerable amount of time in the media spotlight throughout the first half of 2022. However, the buzz surrounding the platform lay at a modest 21 percent, relatively low compared to Facebook’s buzz score of 41 percent.
This text provides general information. Statista assumes no liability for the information given being complete or correct. Due to varying update cycles, statistics can display more up-to-date data than referenced in the text.
Published by S. Dixon, Oct 18, 2022

Social media penetration in the UK
90.02%

Leading social network platform in the UK by reach
WhatsApp

Leading social networks in the United Kingdom (UK) 2021, by reach 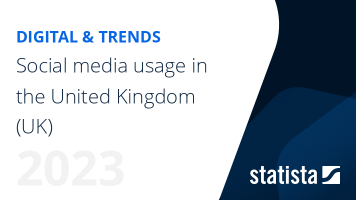 The most important key figures provide you with a compact summary of the topic of "Social media usage in the UK" and take you straight to the corresponding statistics.