Published by Statista Research Department, Nov 22, 2022
Consumers around the world are eating more vegetables as part of a wider trend of health-conscious living, but also because people are increasingly adopting vegetarian or vegan diets. Supply is responding to this growing demand and the global production volume of vegetables reached more than 1.15 billion metric tons in 2020, up from around 682 million metric tons two decades earlier. Regionally, the bulk of the vegetable-producing industry is concentrated in Asia. However, Europe still contributes a little less than ten percent of the global vegetable production. In 2020, 84 million metric tons of vegetables were produced in Europe.

Due to favorable weather conditions in the Mediterranean, Spain was the leading producer of fresh vegetables in Europe, and the only European country to feature on the list of top global producers of fresh vegetables, with a production volume of nearly 13 million metric tons in 2020. In comparison, less than half that figure was produced in the Netherlands in 2021.
Due to its notable position in the European vegetable industry, Spain exports a significant amount of vegetables to the rest of Europe. In 2020, approximately 1.4 million metric tons of vegetables exported from Spain were destined for Germany.

Increasing vegetable consumption has been one of the most dominant food-related behavioral trends in Europe in recent years. As a survey conducted in 2021 revealed, approximately 59 percent of respondents in Europe reported eating more vegetables than they used to. This comes as vegetarian and vegan diets become more widespread, with consumers substituting animal meat with plant-based alternatives and integrating more vegetables in their diets as a result. According to a recent survey, almost half of respondents in Germany reported their willingness to eat more vegetarian and plant-based food. More information on veganism and vegetarianism worldwide can be found here.

In the following 5 chapters, you will quickly find the 32 most important statistics relating to "Vegetable industry in Europe". 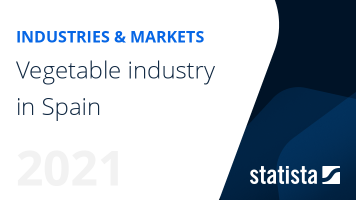 The most important key figures provide you with a compact summary of the topic of "Vegetable industry in Europe" and take you straight to the corresponding statistics.

Fruit and vegetables in the UK

Veganism and vegetarianism in the Netherlands and Belgium 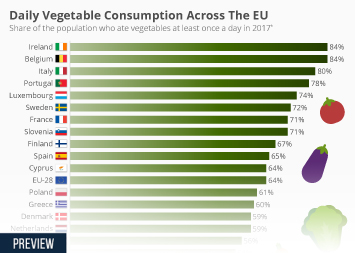