Just like the rest of the world, Chile has seen its online population expand over the last decade. During this period, the number of internet connections in the South American country has grown by almost 900 percent, surpassing 22 million subscribers in 2019. With more than 80 percent of its population using this service, Chile was that year the fourth country with the highest internet penetration in Latin America and the Caribbean. Although most of the country has joined the online space, their experience can vary greatly depending on whether they connect from home or via a mobile device, benefiting from a connection speed between five and seven times higher via broadband.

The growing use of the internet has been accompanied by a constant development in the habits of its consumption. Despite having a lower upload and download speed than its fixed broadband counterpart, mobile internet usage in Chile is far from having lost followers because of it. In fact, between 2009 and 2019 the number of mobile connections in the country increased by over 400 percent, leading it even to become the most frequently used device by Chileans of all ages to navigate the Web. But what do people look for when they connect to the internet? According to a 2019 survey, the main motivation for users in Chile would be to stay connected and entertained. While accessing social networks was the main activity among respondents, with 94 percent of them saying they went online to make use of them, listening to music and viewing video content were also among the top five digital activities.

COVID-19's outbreak and the restrictions that followed reinforced the need for people to stay connected, informed, and entertained. During this time, the Chilean population flocked above all to Facebook on their mobile devices, but the internet’s supportive ability extended further than social media. A study found that three out of four Chileans considered using the internet for medical consultations, and almost as many thought about shopping online for groceries and toiletries. Be it medical consultations, browsing Facebook, or making online purchases, the Chilean population’s usage of the internet, along with most aspects of their daily lives, was inevitably altered by the 2020 pandemic.
This text provides general information. Statista assumes no liability for the information given being complete or correct. Due to varying update cycles, statistics can display more up-to-date data than referenced in the text.
Published by Statista Research Department, Oct 18, 2022

Number of internet subscriptions per 100 inhabitants
124.1

Internet penetration in Latin America and the Caribbean 2022, by country 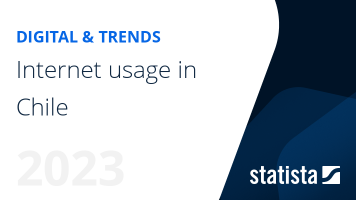 The most important key figures provide you with a compact summary of the topic of "Internet usage in Chile" and take you straight to the corresponding statistics.