The post-pandemic world tends to be challenging for the Chilean mediascape. Despite the initial buzz around home entertainment, audiences seem ready to resume other activities, likely outdoors. A September 2021 survey showed that almost half of internet users in the South American country would keep spending the same amount of time on video streaming and cable TV after restrictions imposed by the COVID-19 outbreak were lifted. But over one-third of respondents said they would rather reduce it a little, a lot, or completely. The daily time spent with pay TV per person in Chile in 2021 remained above the 2010s figures, at three hours and 41 minutes, yet 10 minutes below the 2020 average. Younger viewers did not seem enthusiastic either. An annual study highlighted that Chileans aged 18 to 29 spent less time watching series and films online in 2021 than they did in any other year since 2016.

Will pay TV continue to expand in Chile?

Regardless of the ongoing shifts in media consumption habits, the Chilean pay TV market saw its user base reach new heights as the current decade began. At the end of 2021, the number of pay TV subscriptions surpassed 3.4 million for the first time this century. It was also the third consecutive year of growth for the segment. Similarly, that year Chile's pay TV penetration stood at its third-highest rate ever – 17.5 percent. For comparison, the share had only surpassed 10 percent in late 2010. The indicator refers to the total number of subscriptions divided by every 100 inhabitants.

While about two-thirds of people end up watching pay TV, the share of Chileans accessing video streaming platforms stood just a little above 40 percent in 2021, suggesting that there is still room for expansion. During that same survey, consumers were asked to pick a single favorite subscription video-on-demand (SVOD) service. Seven of 10 interviewees chose Netflix, stressing the benchmark company's persisting hegemony. However, a study conducted around the same time measured the most in-demand digital originals in Chile, and the three absolute leaders were Disney+ productions. Netflix might have had the upper hand, but "Loki," "WandaVision," and "The Mandalorian" came to reclaim the viewers' attention.
This text provides general information. Statista assumes no liability for the information given being complete or correct. Due to varying update cycles, statistics can display more up-to-date data than referenced in the text.

Most trusted media among young adults in Chile 2021 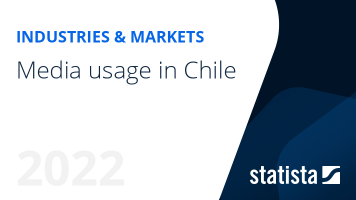 The most important key figures provide you with a compact summary of the topic of "Media usage in Chile" and take you straight to the corresponding statistics.