Chile is a narrow strip of land geographically limited by the driest desert on Earth, by the Andes, and by the Arctic and the Pacific oceans, but its use of social media opens it to the entire world. Home to around 14 million users, the country ranks first in social media penetration in the Americas. Platforms such as Facebook, Instagram, Twitter, and YouTube are among the most popular ones. More importantly, younger generations of Chileans are already engaged with online social networking, which indicates that this market will continue to be relevant on the long run.

Honey, I Facebooked the kids

Social networks are, by far, the most trusted type of media among people aged between 18 and 29 years in Chile. More than half of young adults find social media reliable. So much so that they spend four hours per day on such online platforms, on average. Chilean children are more so engulfed into the online scene, and in a very easygoing manner: over two out five log in on social networks using their own password, a record high in Latin America. Furthermore, around 46 percent of kids in Chile choose a product or brand based on their experiences on social media. This may be linked to the current overall trend – altogether, Chileans already use online social networks very often.

The social media market in Chile is mostly dominated by the field’s largest corporations, namely Facebook, Inc., Alphabet Inc., and Twitter, Inc. Despite the small quantity of major players, the usage of their solutions is nearly ceaseless. More than two thirds of Chilean internet users turn to WhatsApp at least once every hour of the day. Practically seven out of ten users watch something on YouTube every day, and three out of ten check the Twitter feed on a daily basis. The frequent use of social media demonstrates that Chile is a steady online market in Latin America. The fact that its younger inhabitants are exploring these tools equally, if not more, intensively than the average, however, suggests that this solid market is likely to grow even more.
This text provides general information. Statista assumes no liability for the information given being complete or correct. Due to varying update cycles, statistics can display more up-to-date data than referenced in the text.

Consumption among young adults and children 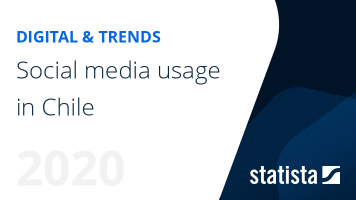 The most important key figures provide you with a compact summary of the topic of "Social media usage in Chile" and take you straight to the corresponding statistics.