Nowadays social media are some of the most powerful tools when it comes to keeping in touch with friends and family, as well as one of the main sources of news, due to their potential of providing information and live streaming at a global level. Moreover, lately social media has had a substantial impact on political expression among the younger generation in Romania, especially in protests and election-related matters. By 2021, there were nearly 15.5 million internet users in the country, out of which more than 11.6 million were social network users. At the same time, despite education taking place almost entirely online because of the coronavirus (COVID-19) pandemic, students experienced considerably lower levels of cyberbullying in online classes than in day-to-day school.

In Romania, Facebook remains the most used social media platform, with a weekly usage rate of 86 percent, and a market share of more than 90 percent. Besides maintaining contact with other people, using functions such as Facebook Messenger, the social media platform is very influential because of its content sharing possibilities. In other words, Facebook is considered to be the second most commonly used information source in Romania, after television news consumption.

Despite leading in terms of users, the social media platform is slowly losing popularity in favor of platforms such as Instagram or TikTok. For example, when it comes to social media usage by group target, Facebook is more popular and accessible among the 35-44 age group. By contrast, Instagram is gaining more and more fame, especially for individuals in their twenties, because of its exclusive photo and video sharing. Nevertheless, although the number of Facebook users in Romania is approximately double the number of Instagram users, the latter has by far a higher engagement rate when it comes to photo and story sharing.

The rise of TikTok

TikTok rapidly differentiated itself from other social media platforms by its content form, displayed as 15-second videos. Only in October 2021 the TikTok app was downloaded from the Google Play store over two million times in Russia, as well as in the USA. TikTok has also been welcomed in Romania with great enthusiasm, the most popular TikTok account belonging to @andragogan, with over seven million followers. If in October 2020, the social media app generated a revenue of nearly ten thousand U.S. dollars in Romania, one year later, in October 2021, TikTok recorded a monthly revenue of nearly 400 thousand U.S. dollars. The social media app’s future remains extremely promising, not only because of its entertaining and educational content, but also because of its new service, TikTok for Business. The new service was introduced in Romania as of May 2021 with the purpose of supporting companies in their marketing strategies and presence on TikTok.
This text provides general information. Statista assumes no liability for the information given being complete or correct. Due to varying update cycles, statistics can display more up-to-date data than referenced in the text.
Published by Statista Research Department, Feb 1, 2022

Most popular TikTok accounts in Romania 2023, by number of followers

Most viewed YouTube channels in Romania 2023, by number of subscribers 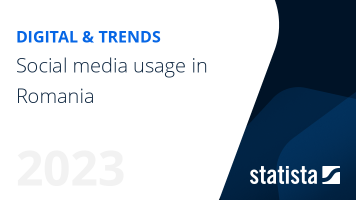 The most important key figures provide you with a compact summary of the topic of "Social media usage in Romania" and take you straight to the corresponding statistics.