The age of social media has hit the world like no other trend before. Social media provides the opportunity to connect with different people throughout the entire world, sharing videos, photos, opinions, and experiences. With great technological advances, connectivity has soared allowing even the most remote of places to have internet access. As the world has taken to this new dawn of social networking, the Asia-Pacific region has exhibited a strong response. Social media consumption in the region has grown dramatically, with the likes of China, India, Indonesia, and Japan leading the way in terms of monthly active users. Additionally, citizens of the Philippines spent the longest time on social media per day, ranking higher than the global average and followed by Indonesia, Malaysia, Thailand, and India. Therefore, it is not surprising that the Asia-Pacific region has a strong social media presence. In the era of consumerism and higher levels of disposable income, smartphones and connected devices have become more widely available to Asia-Pacific citizens, which has further aided the expansion and surge in usage of social media throughout the region.
The many uses of social media

As the Asia-Pacific region becomes increasingly connected with faster broadband speeds and more robust internet access, Asian consumers have passed the point of using social media merely as a means to connect with friends and family. Social media stands as a retail platform for consumers to shop, review, and become more aware of products available – propelling consumerism to an all-time high. Influencing culture is also a widespread trend throughout the world and APAC alike. Celebrities endorse products through social media as a means of enticing social media users to purchase products or follow certain trends. Influencers are paid to make posts on social media that will appeal to their followers. Social networking sites have also allowed people to connect on a professional basis with internet users all over the Asia-Pacific region stating they use social media for work purposes. Gaming through social media is yet another feature that has emerged, with platforms making it possible for users to compete against each other through online games.

What are the leading platforms?

Facebook remains a key social media platform throughout the world and the Asia-Pacific region, having reached just under a third of the world’s population. APAC accounted for an astronomical number of Facebook’s monthly active users, with Facebook representing the largest share of the social media market in the Asia Pacific region. However, despite Facebook’s huge success across the region, Asian platforms are on the rise throughout the region. WeChat (Weixin), owned by Tencent, is a messaging, social media, shopping, and online payment services app which has found significant popularity in Asia. The favored social media app recorded over 1.2 billion monthly active users worldwide. Qzone, TikTok, QQ, and Sina Weibo have all emerged as favored Asian social media networks, with each platform making a prominent mark on the industry. With the number of social media users growing continuously and expressing no plans to limit their usage, it appears as though social media will remain a dominant force in the Asia-Pacific region in years to come.
This text provides general information. Statista assumes no liability for the information given being complete or correct. Due to varying update cycles, statistics can display more up-to-date data than referenced in the text.
Published by Leander von Kameke, Jan 5, 2023 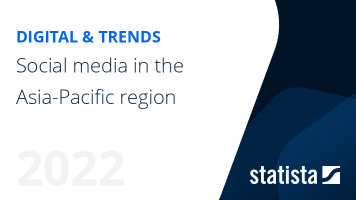 The most important key figures provide you with a compact summary of the topic of "Social media in the Asia-Pacific region" and take you straight to the corresponding statistics.

Users across the platforms