Published by Statista Research Department, Nov 22, 2022
Colombia ranks third in the running for Latin America’s largest advertising market. In 2020, the country accounted for roughly six percent of the region’s total advertising spending, and while investments in more populous countries such as Brazil and Mexico were much higher that year, Colombia’s advertising landscape is also undergoing some noticeable transformations. After a tumultuous year for the local ad industry and a sharp decline in advertising activities amid the pandemic, Colombia’s ad spend was expected to increase by nine percent and reach 1.2 billion U.S. dollars in 2021. That said, it is not only the size but also the structure of Colombia’s advertising landscape that is projected to expand in the future.

Television remains the most popular advertising medium in Latin America, with spending set to grow from 12 billion U.S dollars in 2021 to over 14 billion by 2024. Such an ongoing focus on traditional media can also be seen in Columbia, where linear or non-digital platforms were forecast to account for 67 percent of total ad spend in 2021. When asked about the frequency of TV consumption in a 2020 survey, the lion’s share of Columbian respondents stated that they watched it every day, emphasizing the medium’s lasting role as a source of information and entertainment. Other traditional media formats such as radio or print publications have not lost their advertising appeal among Colombian marketers either, as large shares of the population still consume these outlets regularly. And yet, many traditional outlets have also established an online presence to adapt to the changes in Colombians’ media consumption.

Digital platforms and technologies are becoming essential advertising tools in Columbia as internet adoption rises and the government ramps up investments in local network infrastructures. In 2020, digital advertising spending in Colombia amounted to approximately 357 million U.S. dollars, which was more than double the investment reported only three years prior. Data also shows that spending on digital promotion has increased by double digits for the better part of a decade, highlighting the industry’s ongoing shift towards digital ad destinations and solutions. One vital driver of the advertising landscape’s digital restructuring is the increased focus on mobile marketing. Colombia has a higher mobile penetration rate than most other Latin American markets. Seeing that smartphone adoption and social media use continue to soar, it comes as no surprise that mobile ad spend in Colombia nearly tripled between 2017 and 2020. On a global scale, Colombia also ranks among the countries with the highest share of mobile internet in digital ad spend at around 78 percent.

In the following 4 chapters, you will quickly find the 29 most important statistics relating to "Advertising in Colombia". 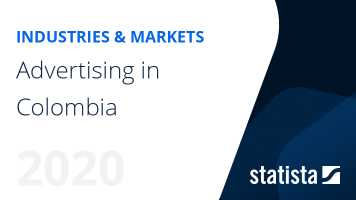 The most important key figures provide you with a compact summary of the topic of "Advertising in Colombia" and take you straight to the corresponding statistics.