Online media and entertainment channels are steadily transforming the Dutch media landscape. Considering that the Netherlands is among the countries with the highest online penetration rates in Europe, it comes as no surprise that audiences in this digitally developed market integrate online media and entertainment formats into their daily lives more frequently than ever. Internet and social media usage have become as popular as watching television, and following the onset of the pandemic, demand for online communication and entertainment has never been higher.

The Netherlands has a social media penetration rate of around 88 percent, making it the largest social media market in the Benelux region. Looking at the most popular social media platforms in the Netherlands, Meta-owned properties frequently steal the show - a trend that can be observed throughout most of Western Europe. WhatsApp was the most-used service among all age groups in 2021, followed by Facebook, Instagram, and YouTube. In addition to social media, Dutch audiences also embrace online video content more vividly than ever, with Netflix topping the VOD streaming charts ahead of all regional offerings.

The video games market in the Netherlands was forecast to exceed revenues of 1.15 billion euros in 2021. App-based gaming was expected to account for the largest share of revenues after seeing a rapid spike in earnings over the past decade. When asked about their favorite device to play video games, almost 50 percent of Dutch survey respondents listed smartphones, indicating a growing interest in playing games like Candy Crush Saga and Coin Master on the go. Gaming fans also enjoy watching other people in action, with gaming video content and live streaming platforms like Twitch taking the Dutch gaming scene by storm. Meanwhile, the music industry is also undergoing an audible digital makeover. In 2020, for example, the revenue of music streaming services in the Netherlands accounted for roughly 80 percent of the industry’s total annual revenue.

Print media is one of the sectors most visibly impacted by the digitalization of everyday life. While print editions still account for the lion’s share of publishers’ earnings, the sales volume share of e-books in the Netherlands has increased for the better part of a decade. Looking at the performance of newspapers, the shift from traditional to digital becomes even more evident. Younger audiences have shown to favor digital news formats, and based on a recent survey, most age groups prefer a mix of digital and print sources combined. So, where do the Dutch get their news? According to the latest data, NU.nl emerged as the leading online news brand in the Netherlands based on audience reach in early 2021.
This text provides general information. Statista assumes no liability for the information given being complete or correct. Due to varying update cycles, statistics can display more up-to-date data than referenced in the text.
Published by Statista Research Department, Jan 10, 2022

Number of internet users in the Netherlands
16.5m

Leading online brand in the Netherlands based on audience reach
Facebook

Biggest online brands in the Netherlands 2014-2020, by audience reach 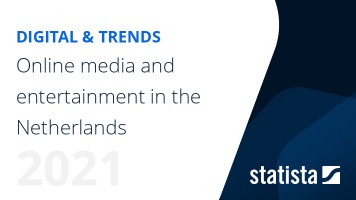 Go to report Digital media in the Netherlands
Top Seller

The most important key figures provide you with a compact summary of the topic of "Digital media in the Netherlands" and take you straight to the corresponding statistics.