Published by
Martin Placek,
Jan 18, 2022
The United States (U.S.) has a long history of automotive production and is home to some of the largest and most famous automotive brands in the world. The year 2020 was, however, a challenging year for many industries, including the automotive industry. The global motor vehicle production dropped by some 11 million units in 2020 compared to the year before and it was estimated that in the NAFTA region, vehicle production was down by almost 21 percent.
In 2020, over 2.2 million cars were produced in the U.S., a decrease of about 12 percent compared with 2019. Retail sales of light vehicles in the U.S. decreased year-over-year as well, reaching approximately 14.5 million units in 2020.

Although electric vehicles (EVs) accounted for just a small share of all light vehicle sales in the U.S. in 2020, their popularity has grown over the past years. Between 2016 and 2020, sales of plug-in light vehicles in the U.S. more than doubled, reaching 340,000 sold units in 2020. This surge in sales has made the U.S. the third biggest market for electric vehicles in the world, trailing only Europe and China.
Along with the growing sales, the number of public fast electric vehicle chargers in the U.S. increased substantially as well. In 2020, there were over 16,700 charges on the American streets, an increase of more than 440 percent compared with 2016.
With substantial backing from the government, EVs are bound to play a more important role in the future of U.S. mobility, mainly due to EVs’ energy efficiency and low carbon footprint. President Biden’s new target for EVs to account for 50 percent of new car sales by 2030 was generally met with the support of major U.S. car manufacturers. While Ford aims at meeting Biden’s target, General Motors went even further, committing to only manufacture electric vehicles by 2035.

Traditional U.S. car manufacturers are consolidated into three major brands: Ford, General Motors, and Stellantis. These manufacturers produce a variety of vehicles, including passenger cars and trucks. Most of the models offered by these companies are powered by gasoline or diesel, though these automakers are starting to enter the EV market. In particular, GM’s Chevrolet Bolt EV hoisted itself among the plug-in vehicles with the largest sales, only surpassed by Tesla. Tesla, on the other hand, is an exclusively electric car manufacturer. Tesla’s Model 3 was the best-selling electric vehicle in 2021.
American brands tended to lead the U.S. market with General Motors and Ford consistently ranking amongst the leaders in terms of market share. Japanese-based Toyota and Honda, however, produced the most popular cars and sport-utility vehicles among U.S. consumers, with stocks of the Toyota RAV4 depleting in 2021, as the global chip shortage impacted the industry.

In the following 4 chapters, you will quickly find the 27 most important statistics relating to "Car manufacturers in the United States".

Statistics on the topic
Light vehicle retail sales in the U.S.
15m units
2021 best-selling car brand in the U.S.
Toyota
Automobile manufacturer with the highest share of the U.S. market
GM

The most important key figures provide you with a compact summary of the topic of "Car manufacturers in the United States" and take you straight to the corresponding statistics. 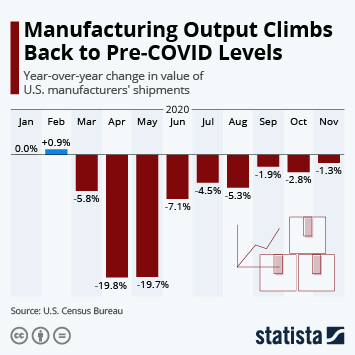 Change in value of US manufacturers shipments