Published by
Mathilde Carlier,
Nov 17, 2022
Fuel efficiency and safety were the driving criteria for new car purchases in the United States. Over 55 percent of respondents in a June 2022 survey ranked both factors as especially important in their decision, above even low vehicle price and driving comfort. With 48 percent of U.S. consumers intending to buy an automobile as of March 2022, the U.S. light vehicle market is becoming more competitive for automakers. Limited vehicle selection and higher-than-expected prices due to the semiconductor shortage have further impacted car buyers’ experiences. The semiconductor crisis affected consumers’ brand perception and satisfaction. Toyota, the second leading brand in the United States with a market share of over 12 percent in the second quarter of 2022, has recorded a drop in overall customer satisfaction since 2017. Depleting stocks and higher prices are, therefore, impacting both customers and car manufacturers.

Competition in a diverse market

Worth over 75.9 billion U.S. dollars as of 2022, Tesla ranked first as the most valuable brand within the automotive sector worldwide, surpassing Toyota and Ford—the U.S. market leader. The American brand, worth just over 13.2 billion U.S. dollars in 2022, held over 13 percent of the U.S. light vehicle market shares during the second quarter of 2022. Ford was also the best-selling brand in the country in December 2021, followed by Toyota. The Japanese manufacturer was a direct competitor of Tesla on the luxury car market, though BMW edged out both brands in 2021 in unit sales. Lexus and BMW came second in terms of U.S. consumer satisfaction index score in 2021, with Ford three points behind. Chrysler, a division of the Netherlands-based Stellantis, was the brand recording the best initial quality in the U.S. as of July 2021. Audi and Volkswagen followed it.

American brands held most of the market in the second quarter of 2022, with Ford, Chevrolet, and Jeep among the five brands with the most market shares. In contrast, European brands were becoming less popular outside the luxury market. Mercedes-Benz, the European brand with the largest U.S. sales, reported under 100,000 new vehicles sold in the U.S. market between April and June 2022, compared to just under 543,600 passenger vehicles for Ford.

Impact of the chip shortage on sales

In March 2022, Ford and General Motors reported halting production at two Michigan manufacturing plants due to the automotive semiconductor shortage. The monthly automotive inventory-to-sales ratio crashed in April 2020 and has yet to recover from the effects of the COVID-19 pandemic, including the depleted chip supply. Average new vehicle prices shot up for manufacturers between December 2020 and 2021, with Ford recording an increase of over 4,000 U.S. dollars. Tight supply also remained an issue for many European and Asian brands, including Toyota, Lexus, and Mercedes-Benz. The popularity of American brands in the U.S. market could be linked to their more extensive vehicle inventory as of June 2022.

In North America, the slow recovery of automobile sales is expected to continue through 2022 without reaching pre-pandemic levels. Global forecasts come to a similar conclusion, suggesting further disruptions in the U.S. market and for U.S. automakers worldwide.

In the following 5 chapters, you will quickly find the 39 most important statistics relating to "Car brands in the United States". 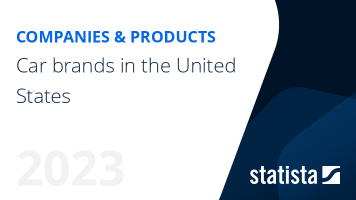 The most important key figures provide you with a compact summary of the topic of "Car brands in the United States" and take you straight to the corresponding statistics.

Car manufacturers in the United States

Luxury Cars in the United States 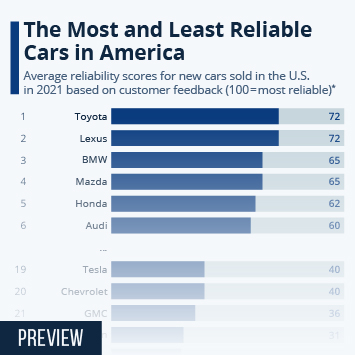 The Most and Least Reliable Cars in America 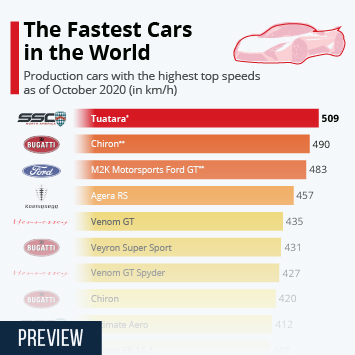 The Fastest Cars in the World