The road to success

Alibaba.com, a Chinese-based B2B marketplace site, was founded in April 1999 by Jack Ma and his team. Three years after the launch, the company became profitable. It soon started rolling out new sites and services such as Taobao.com, a C2C online retail marketplace, a third-party online payment platform Alipay, an instant messaging tool Aliwangwang, and a digital marketing platform Alimama.com. In 2014, the company went public in New York, with a record 25 billion U.S. dollars IPO, bigger than Google, Facebook, and Twitter combined. By then, Alibaba was the world’s largest online commerce platform for small businesses. Today, the Alibaba Group is among the ten most valuable companies worldwide. Alibaba launched its Singles' Day online shopping event in 2009. Since then, the event has been held annually and now become the largest online sales event.

In the fiscal year ending March 31, 2021, Alibaba Group’s annual revenue amounted to around 717.3 billion yuan (approximately 109.5 billion U.S. dollars) with a net income of 143.3 billion yuan (around 21.9 billion U.S. dollars). The majority of group revenues were generated through various e-commerce ventures, with domestic e-commerce retail accounting for approximately 66 percent of revenue share. In the fiscal year 2021, the Alibaba Group generated a gross merchandise volume of nearly 7.5 trillion yuan through its online retail market places, with the cumulative number of active online buyers across all online shopping properties amounting to 828 million as of the second quarter of 2021.

By the end of 2020, the online shopping penetration rate among internet users in Chinastood at nearly 80 percent. The increasing use of mobile internet has opened up the possibilities of mobile shopping for both consumers and e-retailers. Alibaba has seen a rapid growth of mobile usage on its online shopping properties, with the number of mobile monthly active users reaching 939 million as of the second quarter of 2021, up from 874 million users in the same period of the previous year.

In the following 4 chapters, you will quickly find the 24 most important statistics relating to "Alibaba Group".

The most important key figures provide you with a compact summary of the topic of "Alibaba Group" and take you straight to the corresponding statistics.

New retail and other services 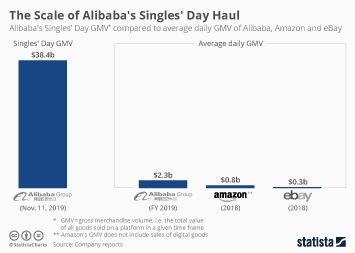