The Singles’ Day sales have been China’s largest online shopping event since its launch in 2009. Starting as a 24-hour online shopping event, Singles’ Day in China has morphed into a two-week marathon, combining online and offline sales. In 2021, around 828 million mobile shoppers participated in this mega shopping carnival, exceeding the population of Europe. Chinese e-marketers recorded a gross merchandise value of 965 billion yuan during the sales, more than eBay’s annual GMV. The shopping festival is spectacular, and the icing on the cake is Tmall’s All-Star Gala on November 10, the night before the event starts. Celebrities were invited to this satellite show from home and abroad, including the most popular singers, actors, and actresses. The four-and-half hour showed climaxes with two weeks of cyber sales.
Singles’ Day in China started in the 1990s as an unofficial celebration among young singles on November 11, or 11.11. The number “1” resembles a “bare stick,” a slang term for bachelor in China. In 2009, China’s e-commerce company Alibaba Group launched its first Singles’ Day sale, which saw unprecedented success. Nowadays, Alibaba’s Singles’ Day trade value has grown almost 1,000-fold compared to 2009, with billions of orders placed on that day on its e-commerce platforms. In 2021, Singles’ Day sales were no longer a solo act of Alibaba. Now, most of China’s major online retailers participate in this phenomenal autumn shopping event. In that year, Alibaba’s main competitors, JD.com and Pinduoduo, recorded 178 million and 471 million active users on Singles’ Day.

Furthermore, new e-commerce trends such as live commerce and community group buying also prevailed during the Singles’ Day sales. Four of five Chinese respondents from a recent survey confirmed that they planned on shopping while watching a live streaming show. Compared to those who don’t watch live streaming, live commerce consumers tended to spend a longer time in shopping apps and were more likely to purchase during the Singles’ Day sales.

Year on year, Singles’ Day sales attract an increasing number of online shoppers worldwide. In Malaysia, Singles’ Day sales have beaten the national Hari Raya sales to become the most participated shopping event. In the United States, around 18 percent of consumers planned to buy their holiday presents during the Singles’ Day sales, eight percent higher than the previous year.
This text provides general information. Statista assumes no liability for the information given being complete or correct. Due to varying update cycles, statistics can display more up-to-date data than referenced in the text.

Yihan Ma
Research expert covering e-commerce and FMCG in Greater China
Get in touch with us now
Published by Yihan Ma, Dec 13, 2021

Number of active shoppers on Singles' Day in China 2021, by e-commerce platform

Singles' Day around the world 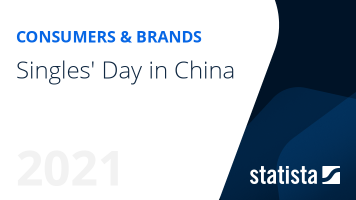 The most important key figures provide you with a compact summary of the topic of "Singles' Day in China" and take you straight to the corresponding statistics.

Singles' Day sales in other countries