Social media services are an increasingly influential means of communication in Japan. People spend more and more time online, which has elevated the importance of online interactions. Survey data show that the average time people spend on social media has increased significantly in recent years. In general, it can be said that younger people use social media more than older people do, and women use social media to a larger extent than men. Despite a rapidly aging and shrinking population, it is expected that the already high number of social media users is expected to increase even further in the coming years. Consequently, social networks and similar services shape everyday culture to an unprecedented degree, both in the private as well as in the public sphere. Next to communicating with others, people also seek out entertainment or information on various topics. The influence of these kinds of services is underpinned by the widespread availability of smartphones and other mobile devices, which have made it much more convenient to engage with other people and consume online content regardless of place and time.

A ranking based on the penetration rates of major services shows that the domestic messaging app LINE reigns supreme in Japan. LINE was developed in 2011 as a response to the Great East Japan Earthquake, which disrupted conventional communication channels in affected areas and made an alternative form of communication necessary. In addition to text messages, the app offers various features associated with social networks, such as Timeline, which makes status posts possible. Next to LINE, internationally successful networks, such as Instagram, Twitter, and Facebook, enjoy a high popularity in Japan. As is the case in many other countries, YouTube is the most successful video-sharing service, while TikTok is particularly well-received by young people. Japan was the first country in which Twitter grew faster in terms of user numbers than Facebook, partly because of the Japanese writing system, which allowed for more content to be written per single post, and partly because of privacy reasons and the prior availability of services similar to Facebook.

The Japanese social media landscape was initially shaped by domestic services, such as the social network Mixi, the video-sharing service Nico Nico Douga, or the gaming-related platforms GREE and Mobage, which were all introduced in the mid-2000s. Prior to the spread of smartphones, a considerable number of people in Japan were used to being connected to others via featurephones, which also made it possible to play games or blog online. Although these domestic services are still in use today, they have come under severe pressure due to foreign competitors entering the Japanese market. Mixi, for instance, recorded increasing user numbers until the beginning of the 2010s and was known as Japan’s leading social network before becoming gradually supplanted by its competition. YouTube started its Japanese language version in 2007, Facebook and Twitter followed in 2008, Instagram in 2014, and TikTok in 2017.
This text provides general information. Statista assumes no liability for the information given being complete or correct. Due to varying update cycles, statistics can display more up-to-date data than referenced in the text.
Published by Statista Research Department, Oct 13, 2022

Most popular social media in Japan FY 2021, based on penetration rate

Most common reasons for using networking services (SNS) in Japan 2021

Most popular social media in Japan FY 2021, based on penetration rate 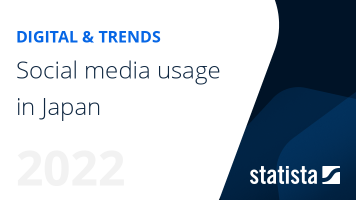 The most important key figures provide you with a compact summary of the topic of "Social media usage in Japan" and take you straight to the corresponding statistics.