For most people in Japan, search engines are an indispensable tool for navigating the internet. While a significant portion of the population also uses social media or video websites to look up information, the most common way to search for things online are search engines. While there are some smaller variations based on the devices people use, a general ranking of the most used search engines shows that Google, Yahoo and Bing are the most prominent services in the Japanese market.

The search engine market in Japan

Google is the most used search engine worldwide, and this is also the case in Japan. Google managed to become Japan’s principal search engine, a spot previously held by Yahoo, by focusing on the mobile market first. The company entered a partnership with KDDI in 2006, which was then followed by a partnership with NTT Docomo in 2008. As a result, Google’s services became integrated with the devices of two of Japan’s major mobile carriers. In the subsequent years, Google managed to surpass Yahoo Japan, which had managed to dominate the market with a highly popular portal website that also included a search engine function. The Yahoo web portal, whose search function has been powered by Google since 2010, remains one of the most accessed websites in Japan, making it an attractive host for various services and digital advertising. While Yahoo Japan was renamed to Z Holdings in October 2019 due to a restructuring process, the name of the web portal was not affected by this change.

How people use search engines

According to survey data, the most common type of information searched for via search engines are words or people one does not know, followed by things related to one’s hobbies. Online services play an increasingly important role in people’s daily lives, and while Japanese consumers place a lower amount of trust in the internet as a source of information compared to other media, they nonetheless regard it as an important source of information. This is especially true in the case of younger generations. While social media are frequently used to look for things related to one’s hobbies or to find out more about celebrities one is interested in, people clearly prefer to use search engines when they want to have accurate information.
This text provides general information. Statista assumes no liability for the information given being complete or correct. Due to varying update cycles, statistics can display more up-to-date data than referenced in the text.
Published by Statista Research Department, Oct 17, 2022

Most common Google search queries Japan 2021, based on index score

Attitudes on internet as a source of information 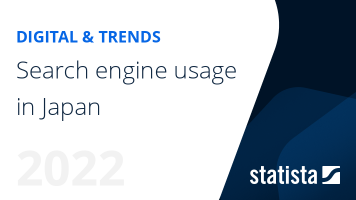 The most important key figures provide you with a compact summary of the topic of "Search engine usage in Japan" and take you straight to the corresponding statistics.