Published by Statista Research Department, Sep 8, 2022
Mobile operating systems (mobile OS) manage the software and hardware of electronic devices such as smartphones, tablets, and smartwatches, and are, therefore, crucial to their performance. Devices come with a pre-installed mobile OS, and different versions are regularly made available with improved security, stability, and performance. These software updates may change the look and feel of how a device operates, but they are integral to making the user experience as pleasant as possible.

The mobile OS market in the United States is dominated by two American multinational companies: Google and Apple. Together, Android and Apple iOS account for 99.8 percent of the total mobile OS market. On the one hand, Android’s success, both in the United States and worldwide, can in many ways be attributed to its open-source software and the fact that it can run on devices from numerous mobile device vendors. On the other hand, the United States is an extremely strong market for Apple. Indeed, despite being limited to devices from a single vendor – iPhone, iPads, Macs, and Apple Watches – Apple accounts for almost 50 percent of the American smartphone sale market share.

As is the case for the smartphone market, Apple also leads the tablet market in the United States. As of 2022, Apple holds almost 55 percent of the tablet market, followed by Samsung and Amazon with significantly lower shares. Furthermore, in the same year, Apple iOS holds almost 54 percent of the market, while Android occupies roughly 46 percent. Most iPad users run their devices on iOS 15.6, which, as of 2022, holds over half of the tablet iOS market. By contrast, in the same year, the most used Android tablet version is 9.0 Pie, with over 35 percent of the Android OS market share.

The two leading operating systems offer their own app stores - the Apple app store and the Google Play Store. Here, users can download and buy all kinds of apps, some of which are available on both app stores and some of which run only on a specific OS. Particularly, as of June 2022, TikTok was the leading iPhone app in the U.S. with over seven million downloads, while the iPad app Roblox recorded the highest revenue with 36.8 million U.S. dollars generated. On the contrary, with almost 1.45 million downloads, Apex Legends Mobile was the most downloaded app in the Google Play Store in the U.S.

In the following 5 chapters, you will quickly find the 27 most important statistics relating to "Mobile OS in the United States". 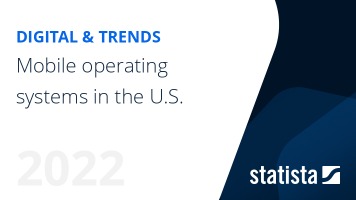 Go to report Mobile OS in the U.S.
Top Seller

The most important key figures provide you with a compact summary of the topic of "Mobile OS in the United States" and take you straight to the corresponding statistics.