Published by A. Guttmann, Mar 29, 2019
In 2016, a little over half of surveyed U.S. small and medium sized enterprises (SMEs) reported having a formal marketing strategy within their businesses. At the same time more than 60 percent said they did not employ a dedicated marketing staff and roughly the same share was willing to outsource those tasks. It was found, that the majority of SMEs reported spending under two hours weekly on marketing efforts, with 5.5 percent devoting between 16 and 24 hours per week on promoting their business. In terms of budgets, nearly half of small and medium sized business (SMB) owners were planning on spending more than four thousand U.S. dollars on marketing in 2017, while close to 30 percent did not expect their marketing expenditures to exceed a thousand U.S. dollars that year. All in all, marketing dollars were mostly invested in social media promotion, followed by public relations, and display ads. Nevertheless, direct mail and internet classifieds remained the leading media that SMBs relied on for advertising and promotion.
While more and more SMBs are shifting their focus to digital marketing tactics, still traditional media are heavily used among those enterprises. Apart from the eternal dedication to direct mail, trade fair visits are one of the more popular tactics implemented into marketing strategies of SMEs, out of whom slightly over a quarter indicate having already adopted it, with further 20 percent planning to do so. Out-of-home advertising, however, does not seem to have traction in this sector, as roughly 70 percent of SMB owners were not even planning to utilize this channel in their promotional efforts. The same was true for magazine advertising. Within the digital realm, social media definitely takes the lead in business promotion. For example, nearly 33 percent of SMBs admitted to paying more than 100 U.S. dollars weekly for social media ads, and close to 29 percent claimed to spend three to five hours on social media marketing every week.

All in all, as far as marketing effectiveness is concerned, a slight majority of SMBs in the U.S. seemed unsure if their attempts were generating a return on investment (ROI). Yet, approximately 34 percent indicated that ROI generated by their marketing efforts was acceptable. Only around six percent were not satisfied with their marketing ROI. And once more, social media was considered as the most effective advertising measure according to U.S. SMBs, even though the opinions were divided on whether or not social media ads brought a positive return on investment.

In the following 5 chapters, you will quickly find the {amountStatistics} most important statistics relating to "SME marketing in the U.S.".

Statistics on the topic
Most common obstacle to developing a marketing plan according to U.S. SMBs in 2016
lack of budget
Share of U.S. SMBs devoting marketing dollars to promoted posts in 2017
62%
Share of local businesses using Facebook ads in 2016
25%

The most important key figures provide you with a compact summary of the topic of "SME marketing in the U.S." and take you straight to the corresponding statistics. 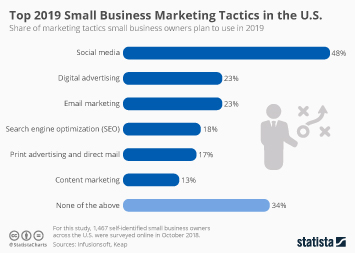 A. Guttmann
Research expert covering advertising and marketing
Get in touch with us now