With its founder Mark Zuckerberg boasting a net worth of 97 billion U.S. dollars in 2021, Facebook has long surpassed its fledgling days as a dorm room project, having risen to become the world’s largest social network. The company has also seen an increase in revenue annually since 2011, with this amounting to 10.14 U.S. dollars per user by end of 2020. Facebook has always made a majority of its profit from advertising, and continues to do so more and more each year. In fact, the segment hit its peak in the fourth quarter of 2020, when the company made nearly seven billion U.S. dollars from advertising in Europe alone.

Who is Facebook's main audience?

Facebook ads mostly cater to millennials, with adults between 25 and 34 years of age making up the largest portion of its British advertising audience in January 2021. Both males and females were represented nearly equally (at 12.8 and 12.4 percent respectively) within this demographic. This was followed by 35 to 44-year-olds. Nearly 60 percent of all Facebook users in the United Kingdom (UK) claimed they logged in multiple times daily. Not only was this a slightly higher percentage than those who did so on Instagram, Facebook usership appeared to be distributed relatively equally across all household income brackets nationwide.

Lack of trust on social media

In a comparison survey among six European countries in 2020, just short of a quarter of British Facebook users had used the platform for news. This was the second lowest share reported after Germany. Comparatively, 56 percent in Italy and 44 percent in Spain reported receiving and sharing news on Facebook. This skepticism toward information on social media was also echoed in a global survey run a year prior, where the UK ranked lowest among 27 countries in terms of trust in social media to ensure truth in its shared content during a crisis.
This text provides general information. Statista assumes no liability for the information given being complete or correct. Due to varying update cycles, statistics can display more up-to-date data than referenced in the text.
Published by S. Dixon, Oct 18, 2022

Leading social networks by share of visits in the UK 2022 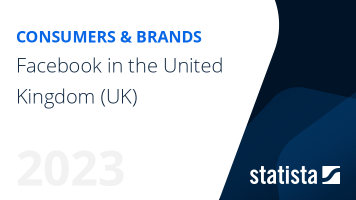 The most important key figures provide you with a compact summary of the topic of "Facebook in the United Kingdom (UK)" and take you straight to the corresponding statistics.