The history of wine in Romania goes all the way back to the Daco-Roman period. French influence also contributed to the development of the Romanian wine market by bringing new types such as Merlot, Chardonnay or Cabernet Sauvignon. Unfortunately, Romanian wine production was reduced during the Communist regime because of the decision to eliminate foreign grape varieties. Currently, wine tourism in Romania and the variety of wine-related events in the country, such as the International Wine Festival and the Bucharest Cheese and Wine Show underline the fact that the Romanian wine market is constantly growing.

According to the International Organization of Wine and Vine, Romania's wine production dropped to approximately 3.6 million hectoliters of wine in 2019, ranking sixth in the OIV top. Most of the country’s wine production, specifically red and white, come from the Moldova Hills, while rose wine production is mostly concentrated in the South and South-West of Romania, namely Muntania and Oltenia.
The vineyards in Romania are spread either in the form of a continuous chain or scattered in vineyard regions - there are seven wine regions: Crisana and Maramures, Muntenia and Oltenia, Transylvania, Banat, Moldova, Dobrogea and the Danube terraces. These regions consist of approximately 40 vineyards, and over 160 wine centers famous for their products. Romania’s total vineyard area peaked in 2019, totaling approximately 182,600 hectares. This is the largest vineyard surface recorded in the last ten years. Of the total vineyard, over 14,000 hectares were destined for the production of a Romanian wine variety called Feteasca Regala.

In 2020, Recas was one of the most important companies in the Romanian wine industry, in terms of both revenue and net profit. The history of the Recas winery dates all the way back to the 15th century and currently oversees more than 1,000 hectares of vineyards. However, Zarea wineries was still the leading winery, totaling a retail market share of 14 percent. Despite Purcari wineries ranking third by retail market share, they recorded one of the highest market share growths, increasing by approximately 266 percent from 2014 to 2020.
This text provides general information. Statista assumes no liability for the information given being complete or correct. Due to varying update cycles, statistics can display more up-to-date data than referenced in the text.
Published by Statista Research Department, Feb 1, 2022

Leading wine companies in Romania 2020, by revenue and net profit 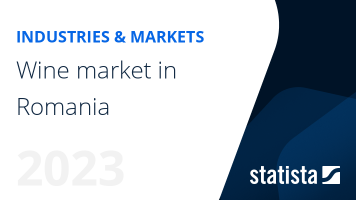 The most important key figures provide you with a compact summary of the topic of "Wine market in Romania" and take you straight to the corresponding statistics.