Appearing in the early 2000s with MySpace, social networks have grown exponentially in recent years. Due to the rise in smartphone usage, new software, progressing user interfaces and, most importantly, the mobility of the internet, the market for social networks was expanded even further. In 2020, more than 36 million people in France were registered on a social network, with around 70 percent accessing them on a daily basis. At these levels, the number of social network users is expected to rise to 38 million in 2022.
But which are the most popular platforms these days? During the third quarter of 2020, the leading social media site in France was YouTube, with Facebook coming in second place. It is safe to say that Facebook has been a strong competitor in the field over the years, recently acquiring other companies such as Instagram and Whatsapp.

Regarding the reason why so many French adults and children use social networks, many cite just wanting to stay connected with friends and their environment. Another reason cited, was to get user opinions and get informed about current issues, for which Facebook seemed to be the most popular in 2020. Especially in times of plight, social networks seem indispensable for engaging communication with friends, family or even strangers. With the outbreak of the Coronavirus (COVID-19) at the end of February 2020, France faced a crisis. With adjustments for work and daily life taking place among the French population, the most downloaded social media applications during the confinement were Plato on the Apple store and Whatsapp on the Google Play store. On a wider scale, TikTok had a major increase in downloads, which was also true for the meeting and messaging software ZOOM Cloud Meetings. Generally speaking, dating apps (such as AdopteUnMec), also considered as social media apps, were among the most popular, according to their revenue in 2020.

In 2019, most entreprises mentioned the benefit of using social media platforms for professional purposes, which is increasing the visibility of the company. In terms of promotion, brands have recognized the importance of social networks posts and have often leaned on influencers who share a passion about brands and products, on which their followers rely heavily. For B2B content creators, Instragram was the platform on which they were represented the most. It does seem that Facebook still holds a strong position for the consumers, as it was the social network on which they liked to shop the most in 2019.
However, Facebook memberships dropped following the Cambridge Analytica affair, which revealed that Facebook did not fully protect the personal data of its members in 2018. In 2020, about 17 percent of young people wanted to delete their social media account because of issues related to personal data, mostly on Facebook. Other reasons to quit social media, especially for children, was their concern to be harassed, with more than 46 percent of them having had a negative experience online in 2021.
This text provides general information. Statista assumes no liability for the information given being complete or correct. Due to varying update cycles, statistics can display more up-to-date data than referenced in the text.
Published by S. Dixon, Jan 27, 2022

Professional use of social networks 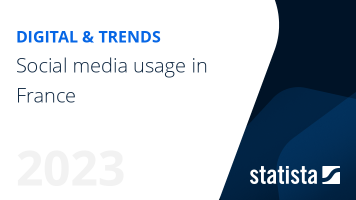 The most important key figures provide you with a compact summary of the topic of "Social media usage in France" and take you straight to the corresponding statistics.

Professional use of social networks and consumerism