Social networks are described as websites where users interact and create relationships based on their interests or activities in the virtual world. It is estimated that there will be around 4.4 billion active users on social networks in the world by 2025, originating largely in American and Asian countries. In Spain, the number of social media users is projected to reach almost 23 million.
The typology of social media sites is rather diverse, but generally speaking those linked to audiovisual and leisure content prevail over those that featured professional content. In this scenario, it comes as no surprise that Facebook, Twitter and Instagram are the three most popular social platforms among internet users. In particular, Facebook registers the highest number of users both nationally and globally. Instagram, owned by Facebook, has gradually been increasing its number of users in recent years. The popularity of this network is reflected in the latest figures, which position Instagram among the top five most popular social platforms in Spain and the sixth with the highest number of monthly active users in the world.

In spite of forecasts predicting a constant growth in the number of users, some older age groups might not be as attracted to social media as the younger generations. According to recent studies, this is mainly due to a lack of interest in these platforms, but there is also an element of fear of one’s private data being misused. In this aspect, it is worth mentioning that in 2019, the Federal Trade Commission (FTC) issued a record-breaking penalty of approximately five billion U.S. dollars against Facebook for violating users privacy and mishandling their personal information. 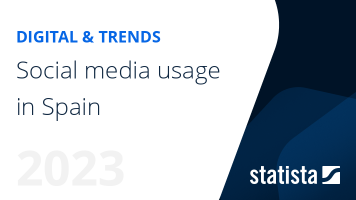 The most important key figures provide you with a compact summary of the topic of "Social networks usage in Spain" and take you straight to the corresponding statistics.