Influencer marketing in Indonesia had been on the rise in recent years. The relatively high rate of social media penetration in Indonesia, combined with the amount of time spent by Indonesians on online media, were among the factors that have contributed to this growth. In addition, the increasing number of brands in the market have made it harder for consumers to decide what to purchase. Recommendations from social media personalities or influencers could therefore help determine their purchase decisions.

The state of influencer marketing in Indonesia

Influencers bridge the gap in terms of engagement and interaction between brands and consumers. By choosing the right influencer based on their niche, brands could expect higher brand awareness. This is because influencers have an established emotional bond with their audience and, hence, they could affect their audience’s preferences and behaviors. In the e-commerce sector in Indonesia, for example, promotional ads on social media and influencer reviews were one of the factors that contribute to the consumers’ online purchase decisions.

Not only businesses have taken advantage of the influencer boom; the Indonesian government has also used it as a vehicle to communicate its programs to the people. Specifically, it was used as a means for the government to reach out to the millennials in the country, who were predominantly active on social media. In 2020, it was recorded that the Indonesian government’s budget for social media and influencer advertising reached almost ten million Indonesian rupiah.

Looking deeper into the Indonesian influencers’ approach to this marketing boom, there were some factors that they used as a benchmark for their pricing strategies. These included the quality of their content and the number of followers they have. In addition, to measure their performance as influencers, they looked at the number of comments and likes they received for their posts, among others.

As one of Southeast Asia’s largest economies, and with the total population in Indonesia surpassing 250 million, it may be a promising market to influencer marketing. Moreover, the number of social network users in Indonesia, projected to reach more than 250 million by 2025, may ensure the stability, if not the growth, of this marketing strategy. The increasing number of social media users may translate to the growing number of influencers from different tiers and niches, as well as an increase in the number of potential consumers for brands.
This text provides general information. Statista assumes no liability for the information given being complete or correct. Due to varying update cycles, statistics can display more up-to-date data than referenced in the text.
Published by Hanadian Nurhayati-Wolff, Aug 9, 2021

Share of internet users who watch videos in Indonesia
98.5%

Online media consumption among internet users in Indonesia 2020 by type 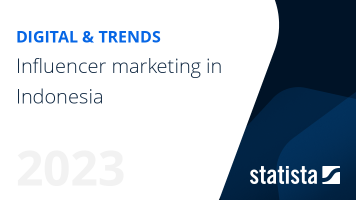 The most important key figures provide you with a compact summary of the topic of "Influencer marketing in Indonesia" and take you straight to the corresponding statistics.