Video gaming has become a mainstream leisure activity around the world and North America accounts for over a quarter of the global gaming market. In 2021, the video game market in the United States amounted to revenues of over 34.5 billion U.S. dollars, up from 27.6 billion U.S. dollars in 2019 with an annual revenue increase of 15.4 percent in 2020. Gaming is gaining in popularity across all age groups, and consumers are increasingly willing to use video games as a social activity and spend increasing amounts of money while doing so.

Consumer uptake and spending on gaming has been accelerated during the COVID-19 pandemic, and digital gaming channels are outpacing physical sales in terms of revenue. Average annual U.S. household expenditure on video game hardware and accessories amounted to 40.29 U.S. dollars, a significant increase from the 26.56 U.S. dollars in the preceding year. Gamers in the United States are also increasingly more willing to spend money on online gaming services (average annual HH expenditure: 22.21 U.S. dollars), with recent survey data indicating that at least half of all gamers in the United States subscribe to at least to one gaming service. The most popular subscription gaming service in the United States is PlayStation Now, followed by Xbox Game Pass and Google Play Pass.

Who are the U.S. gamers?

Despite the predominantly young skew of gamers in the United States, daily user engagement with playing video games and using computers as a leisure activity has increased across all age groups, including seniors. More than a quarter of gamers in the United States played approximately one to five hours of video games per week, and a further 20 percent spent six to ten hours on weekly gaming. Two thirds of U.S. gamers cited relaxation and decompressing as their most important reason for gaming, and filling the time and escapism ranked closely behind. This need for short-form entertainment is also reflected in the most popular gaming genre in the United States, casual gaming.

Casual gaming is one of the strongest genres in mobile gaming, which in turn accounts for the majority of digital gaming revenues in the United States. The entry barriers for users wanting to try mobile gaming are low, and due to the large variety of genres and available gaming apps, there is something for every type of gamer. In the first half of 2021, action and hypercasual were the fastest-growing genres based on revenue growth. The ranking of the most downloaded iPhone gaming apps in the United States also confirms this trend, as fidget spinner gaming apps were a popular summer trend among U.S. mobile gamers.

Streaming and eSports in the United States

Streaming platforms like Twitch or YouTube gaming enable fans to watch gaming video content without having to play the titles themselves and experience games together in a group setting. An August 2021 survey of U.S. gamers found that almost a third of respondents regularly used video streaming sites to watch gaming video content, and a further 15 percent stated that they broadcasted their gaming activities. Despite the global increase of gaming video content output and consumption during the COVID-19 pandemic, following gaming influencers is still far from mainstream in the United States.

Steaming platforms are also the most common way for viewers to experience eSports, organized video game competitions with professional individual players or teams. The United States boasts the biggest eSports player base worldwide, and one of the top professional eSports teams based on all-time winnings: Evil Geniuses. Founded in 1999, Evil Geniuses (EG) are based in Seattle, Washington, and are currently competing in MOBA titles DOTA 2, League of Legends, as well as first-person shooter Counter-Strike.
This text provides general information. Statista assumes no liability for the information given being complete or correct. Due to varying update cycles, statistics can display more up-to-date data than referenced in the text.

J. Clement
Research lead covering internet and gaming
Get in touch with us now
Published by J. Clement, Nov 24, 2022

Number of video gamers in the United States
188.9m

Hours spent on playing video games per week in the U.S. 2022 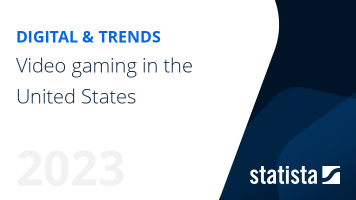 The most important key figures provide you with a compact summary of the topic of "Video gaming in the United States" and take you straight to the corresponding statistics.