The video game industry has long since arrived as a mainstream entertainment option and accounts for the majority of digital media revenues worldwide. When comparing video gaming to other industries, recent estimates state that the video game industry is already bigger than the global book publishing as well as the global newspapers and magazines industry. The worldwide gaming industry has seen a significant boost during the COVID-19 pandemic as many consumers turned to gaming for entertainment and socializing. Subsequently, it comes as no surprise that most valuable game companies are sprawling global entities worth billions of dollars.

In addition to pure-play game developers and publishers, other major digital players such as Tencent and Google also generate significant gaming sales as part of their many revenue streams. Overall, Tencent ranks as the top gaming company in terms of revenues worldwide. In 2021, Tencent’s annual online gaming revenue amounted to 174.3 billion yuan, with smartphone games generating 164.8 billion yuan during the same period.

The three console-makers Sony (PlayStation), Microsoft (Xbox), and Nintendo (Switch) are also among the biggest and most recognizable gaming companies for global audiences. In addition to hardware sales, each of the companies also publish games by other top-ranking developers or own their own publishing studios. In addition to gaming hardware and software, other parties such as digital storefronts Steam, Epic Games Store or Google Play also profit from the digital gaming ecosystem by generating revenue via sales commissions.

In 2021, Activision Blizzard's annual revenue amounted to 8.8 billion U.S. dollars. The company (which was acquired by Microsoft in January 2022) benefits from a vast gaming portfolio and its biggest revenue driver its annual Call of Duty series release. Electronic Arts is widely known for its live service games, especially sports gaming franchises. Take-Two Interactive is a holding company that owns notable subsidiaries including Rockstar Games, the publisher of the ever-popular Grand Theft Auto franchise, which stands at 375 million unit sales as of May 2022.

Despite losing global market share to companies from the United States and China, Japan is a long-established powerhouse of gaming. Many of the largest gaming companies worldwide originated in Japan, with Sony and Nintendo only being two of the top tier examples. Capcom, Sega, Bandai Namco, Square Enix, and Nexon are all major developers and publishers of games that are popular in the domestic and global market.

Osaka-headquartered Capcom is predominantly known for its multi-million selling gaming franchises, led by Resident Evil, Monster Hunter, and Street Fighter. In contrast, Nexon specializes in online games for mobile and PC and is mainly known for its range of MMO games. This focus is also mirrored in the company’s revenue split, as PC accounts for more than two thirds of the company’s revenues.

The Asian market is exploding

Tencent’s dominant position as top gaming company highlights the strength of the gaming market in China. Apart from digital giant Tencent there are also a wide range of other Chinese gaming companies - NetEase, Century Huatong, 37 Interactive, and miHoYo are all gaining international attention, especially when investing in and co-publishing with Western gaming companies.

In 2021, NetEase generated a revenue of approximately 62.8 billion yuan from online game services. The company has released some of the top-grossing IP-based mobile game franchises and partners with Blizzard Entertainment to operate Chinese versions of their games.

The European market is lagging behind

Whereas Europe features a wide range of game developers, there are only a handful of names that rank among the leading gaming companies worldwide. The top European gaming companies include Ubisoft, Embracer Group (formerly known as THC Nordic), and CD Projekt.

Ubisoft, publisher of the long-running Assassin’s Creed series, generated over 2.15 billion euros in annual sales during the company’s most recent fiscal year. Sweden-based Embracer Group reported its best fiscal performance yet with over 17 billion SEK in annual net sales. The Embracer Group is one of the fastest-growing companies in the industry and the company currently owns 181 external and internal studios which were brought into the group via mergers or acquisitions.
This text provides general information. Statista assumes no liability for the information given being complete or correct. Due to varying update cycles, statistics can display more up-to-date data than referenced in the text.

J. Clement
Research lead covering internet and gaming
Get in touch with us now
Published by J. Clement, Nov 17, 2022 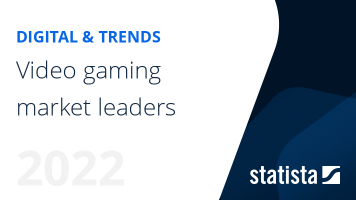 The most important key figures provide you with a compact summary of the topic of "Video gaming market leaders" and take you straight to the corresponding statistics.