Over the last two decades, the internet has rapidly gone from being a technological breakthrough to becoming an integral part of our social and economic lives. In 2019, approximately 81 percent of the population in Latin America over the age of 15 used social networks. As a matter of fact, in Argentina, over 90 percent of internet users were active in social media platforms and according to forecasts, the number of users in these networks will continue to grow in the coming years. In terms of preference of use, about half of social interactions on the web in Argentina that year were carried out on Facebook, while 43 percent of them took place on Instagram.

Platforms for all tastes and ages

Although Facebook and Instagram rule almost sovereignly in Argentina, both platforms have particularly seduced the generation that saw them arise. In May 2020, three out of ten Argentinian Facebook users were between 25 and 34 years old, while for Instagram the percentage of users within this age range rose to 33 percent. Twitter, on the other hand, had a majority of centennial users in the South American country, surpassing millennials by two percentage points. On Twitter, the accounts of renowned Argentinian figures such as the soccer player Sergio Kun Agüero and the journalist Marcelo Tinelli stand out for their high number of followers, with over ten million adherents worldwide. However, social media is not only a place to connect and interact, it is also, to this day, a common source of information. According to a survey conducted in 2020, 54 percent of Argentinians who consumed news said to have accessed news content over WhatsApp.

Social networks have grown to be a powerful commercial tool, with the capacity of generating new opportunities for businesses to promote their products and services, as well as for people to promote their personal brand. Whether big or small, influencers are revolutionizing the way marketing is done, and Argentina is no exception. In 2020, the most popular Instagram account from Argentinians were those of some of the most famous soccer players in the country, with Lionel Messi leading the ranking, having approximately 161 million followers. Another platform widely used by influencers is YouTube. A well known YouTuber in the South American country is Evelyn Vallejos, who as of September 2020 had gained more than seven million subscribers to her channel "Lyna". Additionally, the new TikTok sensation has brought a few youngsters to the world of fame. Up to that month, Celeste Salas was the most followed Argentinian mega-influencer on TikTok with over one million followers.
This text provides general information. Statista assumes no liability for the information given being complete or correct. Due to varying update cycles, statistics can display more up-to-date data than referenced in the text.

Latin America and the Caribbean: Messenger users 2022, by country 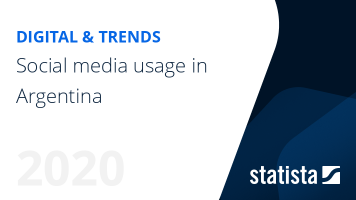 The most important key figures provide you with a compact summary of the topic of "Social media usage in Argentina" and take you straight to the corresponding statistics.