Made of shorter days, snow, and cozy evenings indoors, Christmastime is celebrated throughout Scandinavia, with some traditions even being shared across borders. Being with friends and family and eating Christmas food are some of the most important aspects of this season, a tradition made harder by the coronavirus (COVID-19) pandemic. As of 2021, however, only 12 percent of Danes polled believed the ongoing pandemic was going to affect their Christmas that year.
In Sweden Christmastime is celebrated throughout December until St. Knut’s Day, on January 13. Advent, which starts four Sundays before Christmas and is celebrated at each of those Sundays, often with the lighting of an Advent candle, is also celebrated in the country. A Christmas tree is another one of the most important symbols of what constitutes a real Christmas for Swedes, who look for one and decorate it a few days before Christmas Eve.

Throughout Christmastime, special Christmas food is served in the country, such as the Swedish version of mulled wine, called “glögg", gingerbread cookies (known as “pepparkakor”), and Swedish saffron buns (“lussebulle”). The Christmas version of Sweden’s famous buffet-style meal concept of “smörgåsbord” is called “julbord”, traditional to Swedish cuisine. Among the most popular dishes at the julbord are Christmas ham, pickled herring, and “Janssons frestelse”, a traditional casserole made with potatoes, onions, pickled sprats, breadcrumbs, and cream. Most Swedes prepare their julbord themselves, with only two percent of them ordering everything for that meal.

Most holiday purchases in the country were expected to be made on Black Friday and in fact, almost 20 percent of Swedes start their holiday shopping on that day. Since the coronavirus pandemic started, in-store shopping cannot come without some concern, and in 2021, 22 percent of the people aged 65 to 79 years stated they preferred to buy Christmas gifts online to avoid crowds. The trend is further supported by a survey conducted in November and December that same year, which showed 47 percent of the respondents would buy the majority of their Christmas gifts online.

Although most people intended to spend around the same amount of money they had spent in the previous year, 15 percent of Swedes polled by a late 2021 survey said they intended to spend more money on that year's Christmas. As of 2020, Christmas consumption amounted to around 16 percent of the disposable income of Swedish households, and the 2021 holiday sales in the retail trade were expected to reach nearly 87 billion Swedish kroner.
This text provides general information. Statista assumes no liability for the information given being complete or correct. Due to varying update cycles, statistics can display more up-to-date data than referenced in the text.
C. Simionato
Research expert covering DIY, home improvement and furniture retail
Get in touch with us now
Published by C. Simionato, Dec 17, 2021

Most preferred beverages for Christmas in Sweden 2021 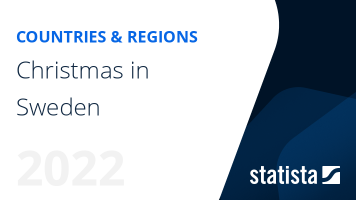