Apple in the UK - statistics & facts

Published by
Federica Laricchia,
Jan 19, 2022
Developing consumer electronics, computer software, and online services, Apple was founded in 1976 by Steve Jobs, Steve Wozniak, and Ronald Wayne in California. Over the decades, Apple has experienced a never-ending growth, becoming one of the most valuable brands in the world and one of the Big Five America IT companies.
In Europe, Apple’s net sales exceeded 89 million U.S. dollars in 2021, with the United Kingdom hosting the highest number of Apple stores. It has been reported that, in 2020, Apple sales amounted to over 1.1 billion GBP (around 1.5 billion U.S. dollars) in the UK, becoming more valuable than Great Britain. However, it seems that the American tech giant had paid only nine million GBP (over 12 million U.S. dollars) in UK taxes that year.

As the leader of the tablet computer market, the iPad plays an important role in the Apple ecosystem, contributing to almost ten percent of Apple's total revenue in the fourth quarter of 2021. In the United Kingdom, Apple iOS recorded the highest market share of tablet operating systems with over 60 percent, and over a third of the population owned an iPad in that year. By contrast, Windows held the lead in the desktop operating system market, with Apple’s OS X ranking second on around 27 percent. This is reflected in the small percentage of households owning a desktop Mac PC in 2021.

Available on the market since 2007, iPhone soon became the most successful Apple product. In the last quarter of 2021, iPhone 12 Pro and iPhone 8 were the most popular iPhone models on the UK market, ahead of models released by its competitor Samsung.

Apple’ App Store also contributes to the company’s revenue. On the platform, several types of apps are available, both for iPhone and iPad, such as social media, entertainment, shopping, music, and gaming apps. For instance, with over 327 thousand downloads onto iPhone devices, Facebook generated a revenue of around 105.5 thousand GBP (144 thousand U.S. dollars) in the month of October 2021.

In the following 6 chapters, you will quickly find the 34 most important statistics relating to "Apple in the UK". 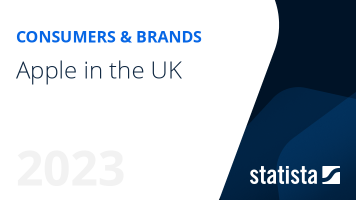 Go to report Apple in the UK
Top Seller

The most important key figures provide you with a compact summary of the topic of "Apple in the UK" and take you straight to the corresponding statistics.

Apple products in the U.S.