Much has changed since Apple's humble beginning in a garage in Los Altos, California. Today, Apple has become one of the most valuable companies in the world. Apple's global revenue surpassed 365 billion U.S. dollars in their 2021 fiscal year, with over 40 percent of it being generated in the Americas. In the United States, Apple has around 270 stores, where one can buy all Apple products, including home entertainment devices, like Apple TV and Apple HomePod.

A large portion of Apple's revenue stems from the massive success of the iPhone, a product that accounts for around half of the company's total revenue. The total number of iPhone users in the United States has increased significantly in recent years, growing from 45 million in 2012 to 125 million in 2022. Apple's iOS operating system has accounted for more than 50 percent of the U.S. smartphone operating system market for each of the last six years. Similar to the market for smartphone operating systems, the U.S. tablet operating system market has just two real competitors: Apple and Android. First released in 2010, the iPad has become the highest-selling product in the American tablet industry, occupying more than  54 percent of the market. In addition to its iPhone and iPad sales, Apple shipped almost 11 million Mac computers in the United States in 2021 alone.

Apart from its successful hardware, Apple has also observed an increase in the revenue generated from its app store. Many of the company’s most popular app categories are gaming, photo, and video apps such as Roblox, Instagram, and YouTube, while entertainment apps such as TikTok and HBO Max generated sizeable revenues. Further, consumers can access the likes of Spotify, YouTube Music, and Amazon Music Music, services that compete with Apple's own "Apple Music" to provide users with streaming music options when they are on the go.
This text provides general information. Statista assumes no liability for the information given being complete or correct. Due to varying update cycles, statistics can display more up-to-date data than referenced in the text.

Apple's revenue broken down by geographical region 2012-2022, by quarter

Overview: Apple in the U.S. 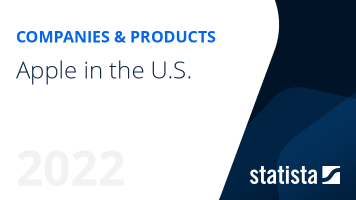 Go to report Apple products in the U.S.
Top Seller

The most important key figures provide you with a compact summary of the topic of "Apple products in the U.S. " and take you straight to the corresponding statistics.