In the era of social media, consumers spend a substantial amount of time absorbing content created by their peers. It is not surprising that their decisions are influenced by what they listen to, see, and read. Both brands and content creators have seized this opportunity and developed a marketing model, that takes advantage of the relatability and popularity of digital content creators. Influencer marketing allows advertising to reach target audiences more precisely and tailor to the specific needs of the consumers.
As the usage of social media increases, resulting in larger influencer followings, the market size of influencer marketing has also been expanding rapidly. Influencer marketing in Asia relies on awareness-driven campaigns, as it is comparatively new in many Asian markets. However, along with the development of digital and social commerce services, markets like Indonesia, Malaysia, and Thailand have already adopted performance-driven marketing.

In Asia, influencers with ten to 100 thousand followers were most common, excluding China. Leading social media platforms for influencers in China differ from the rest of the region. TikTok, known as Douyin in China, attracts the greatest number of users that follow top-tier influencers in China. At the same time, TikTok is banned in some Asian countries like India and Indonesia. On the other hand, YouTube has been and continues to be the leading platform for influencers in Asia. Over a million YouTube channels in Asia have over one thousand subscribers – the number of followers needed to get sponsorship for a video. Additionally, Instagram and Facebook usage has been increasing, coincidentally with the popularization of short-form videos.

The number of social media users in Asia far exceeds a billion. Though it is hard to accurately determine what share of social media users follow influencers, highly populated markets such as India, China, and Indonesia have higher penetration rates than the global average. Aside from the population of followers, engagement is essential for successful influencer marketing. In a recent survey, over half of shoppers in Thailand reviewed recommendations from influencers before making purchases. Thailand was also one of the Southeast Asian countries with the least preference regarding language, ethnicity, and gender appearance of influencers compared to Vietnam and Indonesia, where consumers preferred to follow influencers of similar backgrounds.
This text provides general information. Statista assumes no liability for the information given being complete or correct. Due to varying update cycles, statistics can display more up-to-date data than referenced in the text.
Published by Leander von Kameke, Jan 5, 2023

Number of YouTube channels with over 1 million subscribers in Asia
10,164

Share of consumers in SEA that consider recommendations from influencers
39% 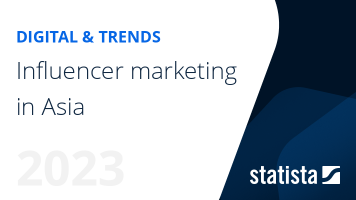 The most important key figures provide you with a compact summary of the topic of "Influencer marketing in Asia" and take you straight to the corresponding statistics.