From how you think to how you shop, social media is reshaping people's daily lives in many ways. China has the largest social media population worldwide, nearly 300 million more than India, which ranks at second place. On average, internet users in China spend nearly two hours a day browsing social media. Chinese internet users not only spend time on social media to connect with friends and follow the latest news but also to get information on new products and secure the best deals. In 2022, around 84 percent of Chinese consumers have shopped on social media platforms, one of the highest in the world.

The rising popularity of social commerce

The prevalence of e-commerce and social media has inevitably combined to hatch social commerce, a platform where goods can be promoted, listed, and sold. Unlike traditional e-commerce platforms, consumers are encouraged to interact with others and create their unique content in the process of shopping. Using social network platforms as a way to connect merchants, influencers, and potential consumers, social commerce is well placed to lead the future of China's e-commerce. Regardless of a setback due to COVID-19, Social commerce in China has seen solid growth in the past years. The number of social commerce users reached 850 million in 2021, while its market size was estimated to surpass 2.5 trillion yuan. The social commerce industry is estimated to create around 77 million jobs in China in 2020, and this number should continue to grow.

The phenomenal success of Pinduoduo marked a new era of social commerce in China. Founded in 2015, the online group-buying discounter made its way to the 20 most valuable companies globally in 2022. The success of Pinduoduo came from its unique "team purchase" model. Users could unlock a better price by inviting their friends and family to join the purchase.

While the majority of Pinduoduo's users were based in third and fourth-tier cities in China, young females from the first and second-tier cities were obsessed with Xiaohongshu. With 450 million users, the shop-and-share platform allows its users to post content and interact with others.
However, social commerce is not only the battlefield of unicorns. Traditional e-commerce giants Alibaba and JD.com also joined the competition to blaze a new trail in the saturated e-commerce market. Taobao, the biggest B2C online shopping platform under Alibaba, launched its live commerce service Taobao Live in 2016. Nowadays, Taobao generates approximately half a trillion yuan GMV from its live streaming business annually. In 2019, JD.com published Jingxi, which is a Pinduoduo-like group buying WeChat mini program. As of August 2021, Jingxi accumulated more than 107 million monthly active users, becoming the second most popular WeChat e-commerce mini-program among Chinese users.
This text provides general information. Statista assumes no liability for the information given being complete or correct. Due to varying update cycles, statistics can display more up-to-date data than referenced in the text.

Yihan Ma
Research expert covering e-commerce and FMCG in Greater China
Get in touch with us now
Published by Yihan Ma, Nov 17, 2022 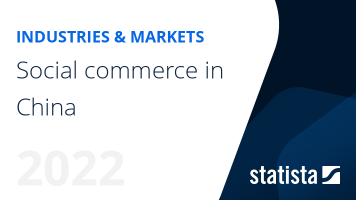 The most important key figures provide you with a compact summary of the topic of "Social commerce in China" and take you straight to the corresponding statistics.