Influencer marketing has become an important segment of the marketing business in Japan. The spread of smartphones and the increasing time people spend online, particularly on video websites and social media, has made online advertising in general more attractive in recent years. Analysts point out that there is an ongoing reallocation of marketing budgets from traditional to digital media, which has been further accelerated by the spread of COVID-19. The annual expenditure on influencer marketing was estimated to amount to 74.1 billion Japanese yen in 2023, with forecasts expecting strong growth in the coming years. Although influencer marketing is not yet a large segment when compared to the total expenditure on social media marketing, it constitutes an attractive venue for advertisers due to the personal link between influencers and their audiences.

Japan has a high internet penetration rate and consequently also a large social media user base. Many Japanese consumers rely on the messaging app LINE in order to stay connected with friends and acquaintances. YouTube is the most popular video-sharing service, while Instagram and Twitter both enjoy a higher popularity than Facebook. As is the case in many other countries, TikTok is embraced particularly by young people. Depending on user demographics and features, each service offers different opportunities for advertisers. A breakdown of the annual expenditure on influencer marketing by segment shows that YouTube accounts for the largest share of influencer marketing in Japan, followed by Instagram and Twitter.

Rankings of the most popular accounts on each social network also indicate differences between audience preferences. While the most popular accounts on Instagram and Twitter often belong to celebrities, the most popular profiles on Facebook are dominated by brands instead of famous people. The most-followed accounts are not the only ones attractive to advertisers, however, as influencers with a smaller following usually have a closer connection with their audiences and therefore higher engagement rates. Furthermore, micro and nano influencers can cater to niche audiences with highly specific tastes. One trend observed in Japan in recent years are virtual influencers, which are designed from the outset for marketing purposes.
This text provides general information. Statista assumes no liability for the information given being complete or correct. Due to varying update cycles, statistics can display more up-to-date data than referenced in the text.
Published by Statista Research Department, Nov 9, 2022 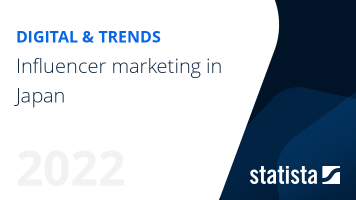 The most important key figures provide you with a compact summary of the topic of "Influencer marketing in Japan" and take you straight to the corresponding statistics.