In recent years, watching videos online has become one of the most engaging activities for digital consumers in the United Kingdom. Video content on the internet offers a vast options range, from social videos generated by users, to professional web series hosted for free on YouTube and major productions available for streaming on national and international entertainment platforms.
In 2021, digital video retail sales in the UK, which include online video-on-demand and streaming on-demand, generated over 3.5 billion British pounds. The main benefit driving UK consumers towards purchasing digital video content was watching what they wanted when they wanted, and the great variety of content available.

In 2021, the digital content audience in the UK reached almost 50 million users, and it is estimated to experience an increase of approximately nine percent, reaching 54 million users by 2026. In January 2022, as the ongoing global coronavirus crisis appeared to be normalizing, 43 percent of internet users in the UK found themselves watching more video streaming content than before the start of the pandemic. In the second half of 2020, the pandemic drove online viewing trends to skyrocket, but as restrictions drop it is unclear if usage rate will remain high. Engagement on social video platforms kept growing throughout 2021, with viewers spending larger shares of their online time on YouTube and TikTok compared to 2020. Meanwhile, time spent watching broadcaster TV, while still accounting for the largest share of viewing time among UK audiences, experienced a small decrease between 2020 and 2021.

In February 2022, YouTube.com was the most popular video and streaming website in the UK by far, accounting for almost 72 percent of desktop traffic from users in the country. Netflix followed, accounting for a market share of around nine percent. By comparison, TikTok was the leading entertainment app in the Apple App Store for iPhone users, with approximately 1.9 million downloads during February 2022.

The number of households who decided to subscribe to video-on-demand services experienced a sudden 15 percent increase between the first and the third quarter of 2020, growing from 15 million to over 17 million households, before settling on a slower growth trend. In comparison, the number of UK households opting for a Netflix subscription jumped from 13 million to over 15 million between the first and the third quarter of 2020, but the popular video provider has been struggling to add new subscribers both globally and in the UK market. Similarly, Amazon Prime saw approximately 12.6 million subscriptions from UK households during the last quarter of 2021, registering a growth of less than one percent compared to the previous quarter (529740).

Social video in the UK

In recent years, video has become one of the most engaging formats for social platforms, with Instagram, Facebook, and even Twitter experimenting with this type of media. As of the third quarter of 2021, music videos, memes, and tutorials were the most popular types of content for online video users in the UK. Social videos in a short format, like the ones popularized by Snapchat, TikTok, and YouTube Shorts, experienced a staggering increase in popularity between 2020 and 2021, with over seven in 10 internet users in the country reporting watching social short videos weekly.

The increased viewership of short videos has been following the popularity rise of the social video app TikTok, which kept increasing its users count in the United Kingdom throughout 2021, reaching a peak of 9.2 million monthly active users in October 2021. As usage appeared to slow down at the beginning of 2022, it is unclear whether the popular social video platform - which has been amassing an average of over 27 hours in monthly engagement by users in the UK in 2021- will manage to keep users entertained at the same rate.
This text provides general information. Statista assumes no liability for the information given being complete or correct. Due to varying update cycles, statistics can display more up-to-date data than referenced in the text.
Published by L. Ceci, May 18, 2022

Digital video purchases in the UK 2022

Digital video usage by devices in the UK 2022 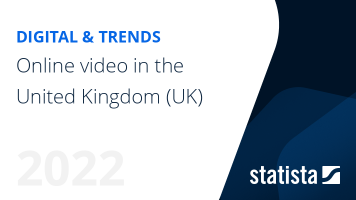 The most important key figures provide you with a compact summary of the topic of "Online video usage in the United Kingdom" and take you straight to the corresponding statistics.