Under Armour, Inc. is an American sporting goods manufacturer that supplies athletic and casual apparel, as well as footwear. Although it was founded in 1996 and is therefore much younger than established athletic apparel market leaders Nike and Adidas, Under Armour generated the sixth-highest revenue of athletic apparel, accessories and footwear globally, making it one of the most valuable sports business brands in the world today.

From humble beginnings to major player

Under Armour started with a simple plan to make a superior T-shirt. A shirt that provided compression and took perspiration off your skin rather than absorb it. A shirt that worked with your body to regulate temperature and enhance performance. Under Armour is the originator of performance apparel - sportswear engineered to keep athletes cool, dry, and light throughout the course of a game, practice, or workout. Over the years since, the company has grown and expanded significantly, generating a total of over five and a half billion U.S. dollars in global net revenue in 2021.

As of that year, Under Armour employed an estimated seventeen and a half thousand people and has, aside from its global headquarters in Baltimore, Maryland, offices and locations all over the world. Many of the company’s factory house stores were specifically located in United States. At roughly 2.7 billion U.S. dollars’ worth of net revenue in 2020, this is also where Under Armour generates the majority of its sales. The manufacturer’s most lucrative product category is its apparel segment, which represented approximately two-thirds of Under Armour’s total sales. Footwear, on the other hand, accounted for just over a fifth of the company’s net sales.

The power of marketing and advertising

The success of Under Armour is attributed to its innovative use of fabric technologies, eco-friendly operations, and high brand recognition, from both professional athletes and local communities. Some of Under Armour’s most talked-about celebrity endorsements come from the NFL’s Tom Brady, Olympian Lindsey Vonn, and professional basketball player Stephen "Steph" Curry. The company’s logo has become a permanent fixture of many professional sporting events, from football and boxing matches to snowboarding and gymnastics competitions. Additionally, Under Armour provides equipment for many collegiate sporting events, most notably for the University of Maryland, the alma mater of founder Kevin Plank. The sportswear company invested about 650 million U.S. dollars in marketing activities in 2021.
This text provides general information. Statista assumes no liability for the information given being complete or correct. Due to varying update cycles, statistics can display more up-to-date data than referenced in the text.

D. Tighe
Research expert covering shopping behavior, sports and leisure retail, and the subscriptions and direct selling industry
Get in touch with us now
Published by D. Tighe, May 13, 2022 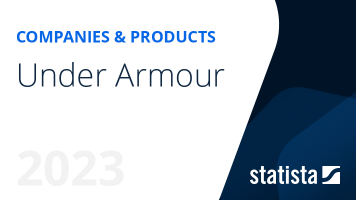 The most important key figures provide you with a compact summary of the topic of "Under Armour" and take you straight to the corresponding statistics.

Key Figures of Under Armour