Published by Statista Research Department, Jun 7, 2022
The finance and insurance industry in the United Kingdom was the worst performing in terms of median pay between full-time male and female employees. In April 2017, new legislation came in that meant all companies operating in the United Kingdom with 250 or more employees had to provide specific data in a bid for transparency regarding the gender pay gap in their respective organizations. The aim of this new regulation was not only to push larger companies towards gender equality but perhaps incentivize specific organizations into closing the gender pay gap. In no sector is the need for positive and equal change more prevalent than in finance, which has the largest median gender pay gap of any sector.

The financial services industry employs approximately 344,000 full and part-time female workers as compared to around 516,000 men. However, the largest difference in employment between the genders is in the type of employment: a much largest number of females than males are part-time employed. In 2021, the mean weekly gross earning of a woman in the financial and insurance industry was just over 60 percent of that of a male employee. The figures of pay differences between men and women in the industry shows that there is certainly room for improvement, especially for women employed at some large UK banks.

Large banks in the United Kingdom are now required by law to publish their median and mean gender pay gaps, the proportion of men and women in each quartile of the pay structure, as well as pay gaps in any bonuses paid out during the year in question. The gender pay gap is not to be confused with equal pay, but instead looks at all roles at all levels of an organization, rather than comparing pay received by men and women for the same role.

In the following 5 chapters, you will quickly find the 27 most important statistics relating to "Gender pay gap in UK financial sector".

The most important key figures provide you with a compact summary of the topic of "Gender pay gap in UK financial sector" and take you straight to the corresponding statistics.

Gender inequality in the UK

Financial markets in the UK 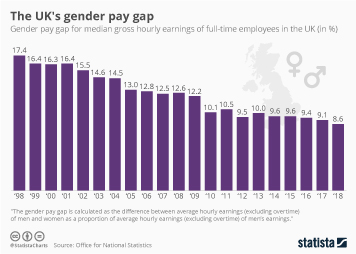