Published by D. Clark, Aug 22, 2019
In 2018, the United Kingdom ranked fifteenth in the global gender gap index, placing it just behind other European countries such as France and Germany, but it was one of the leading nations for gender equality nevertheless. As of 2019, the United Kingdom is in a minority of states to have a female leader in the Prime Minister, Theresa May. In the House of Commons, there were 208 female Members of Parliament, elected in 2017, 119 of which belonged to the Labour Party. Indeed, the proportion of female MPs in the House of Commons has been increasing in almost every election since 1979, when it was just three percent, compared with 32 percent in 2017.
While women appear to be approaching equality in British politics, progress has been arguably slower in the wider workplace. In 2018, only seven FTSE 100 companies and five FTSE 250 companies had female CEOs. The low share of women in top positions certainly contributes to the overall gender pay gap in the United Kingdom, although at every level of the British civil service men earned more than women in 2018. In terms of median hourly earnings, men earned an average of 14.93 British pounds, compared with 13.55 British pounds for women. In certain industries the gender pay gap is more pronounced than others, with a difference of 35.7 percent between male and female average hourly earnings in the financial sector.

As recently as 1987, 48 percent of people in the United Kingdom agreed with the following statement "a man's job is to earn money: a women's job is to look after the home and family." Unsurprisingly, the share of people of who agree with this sentence has declined considerably, to only eight percent in 2017. In 2019, 55 percent of men agreed that achieving equality between men and women was personally important to them, while a further 29 percent identified themselves as being a feminist.

In the following 4 chapters, you will quickly find the {amountStatistics} most important statistics relating to "Gender inequality in the UK".

The most important key figures provide you with a compact summary of the topic of "Gender inequality in the UK" and take you straight to the corresponding statistics. 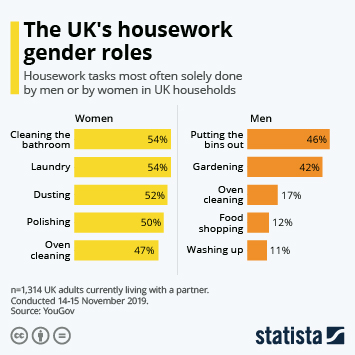