Facebook has been a leading global social media platform over the past years. This trend was not an exception in the Nordic countries, where over seven million Swedes, four million Danes and more than three million Norwegians and Finns used the social network on a monthly basis in 2018. The distribution of male and female users was relatively even in all of the aforementioned countries. However, in Finland slightly more women than men used Facebook, amounting to 52 percent of the total users.
Which age groups in Sweden used Facebook? As of 2018, 25 to 34-year-olds composed the largest share of Facebook users. 12 percent of men and 11 percent of women of these ages were using the platform. The corresponding figures in Norway were similar. 11 percent of men and ten percent of women in the same age group used Facebook. In Denmark, the share of men and women aged 25 to 34 years was equal, at ten percent.

Most Facebook users accessed the app several times a day in 2019. When it comes to device usage, mobile phones were in the lead for connecting to the social network in the Nordic countries. In fact, over 80 percent of Nordic Facebook members used their phones for this purpose in 2018.

The rankings of the most popular Facebook pages varied in the Nordic countries. The football player Zlatan Ibrahimovic ranked first in Sweden, with over 26 million Facebook fans. The most followed Facebook page in Norway was the nature-focused page of the Aurora Borealis Observatory in Senja. In contrast, the most liked pages in Denmark, Finland, Iceland and the Faroe Islands belonged to musicians and bands.
This text provides general information. Statista assumes no liability for the information given being complete or correct. Due to varying update cycles, statistics can display more up-to-date data than referenced in the text.
Published by S. Dixon, Feb 8, 2022 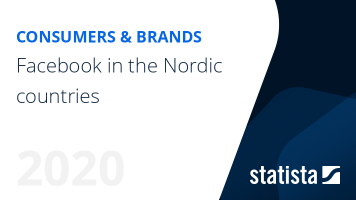 Go to report Facebook in the Nordic countries
Top Seller

The most important key figures provide you with a compact summary of the topic of "Facebook usage in the Nordics" and take you straight to the corresponding statistics.

Usage in the Nordics