Marketing professionals face increasing challenges on how to best use social media platforms in their advertising strategies. This seems at first glance especially true for strategies aimed at Belgium, a country where digital ad spending grew slower than in other European countries. Total expenses on offline advertising were roughly four times bigger than its online counterpart, with television advertising alone reaching a value of roughly 1.7 billion euros in 2018. Note, however, that ad purchases in Belgium tend to be expensive due to the country's fragmented media market. For example, Belgium has 11 television channels aimed at a French-speaking audience (Wallonia), against 17 channels for the Dutch-speaking region of Flanders. A marketer who wants to purchase an ad for the whole country has to essentially buy it twice, once for Flanders and once for Wallonia. This could explain why social media advertising is seen as an attractive alternative option to use in media campaigns in Belgium.
Facebook, YouTube and LinkedIn were Belgium's most commonly used social media channels for content marketing in 2018. Noticeable in Belgium is the frequent use of influencers. More than half of the CMO respondents to a 2018 survey indicated they use influencer marketing to reach Gen Z, seeing bloggers as the most useful type of influencer marketing. This is possible as Belgium has many popular social media channels that reach a domestic audience. The most subscribed YouTube channels from Belgium, for example, shows several bloggers, such as Flemish kids blog LittleBoyAdam, the account of actor Jimmy Labeeu, the two channels of makeup artist Lufy and vlogger Gaëlle Garcia Diaz. An important feature of all of these channels is that they are in French (or, in the case of LittleBoyAdam, offer a French language sub-channel), which allows them to reach an audience in the Walloon region. This unlike Dutch YouTube channels, which sometimes have a large international reach due to their English language.

If Belgium's most popular influencers are all speaking French, how does this affect the Dutch region of Flanders? According to a 2019 survey in the Flemish region, Gen Z was still open to influencer marketing. One out of four 16-to 24-year-olds said they were willing to learn more about a product when it had been recommended by an influencer. Marketers targeting the youngest members of Generation Z should note, however, that YouTube was only the fourth-most popular social media platform among 12-to-18 year olds in 2018, behind Facebook, Snapchat and Instagram. Nevertheless, this Flemish openness to ads was also present towards general advertising on social media platforms. When asked whether social media ads (influencer recommendations, an ad on a social network or a post from a particular company) affected their shopping behavior in 2019, one out of three Flemish respondents said this did influence them. Flemish millennials (ages 25 to 34) were, in this case ,more likely to be influenced than their Gen Z counterparts.
This text provides general information. Statista assumes no liability for the information given being complete or correct. Due to varying update cycles, statistics can display more up-to-date data than referenced in the text.
Published by Statista Research Department, Jan 6, 2023 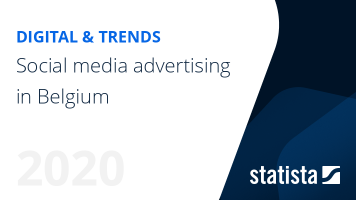 The most important key figures provide you with a compact summary of the topic of "Social media advertising and marketing in Belgium" and take you straight to the corresponding statistics.