For businesses and consumers alike, sales seasons are synonymous with opportunity. While retailers count on these days to boost their sales and successfully close their balance sheets, many shoppers wait each year for the best deals and discounts to make the purchases they need. In 2020, the lockdown implemented to combat the coronavirus pandemic contributed to the online sales surge, overshadowing other popular e-commerce dates in France. Still, events such as Black Friday week, French Days, and Christmas sales remained drivers of online sales in the European country.

Over the past few years, the U.S. e-commerce events Black Friday, Cyber Weekend, and Cyber Monday have gradually stolen the limelight in France. Between 2016 and 2020, online spending during these dates grew by more than 75 percent, amounting to nearly 1.3 billion euros that last year. In 2021, approximately nine out of ten French consumers had plans to incorporate e-commerce into their Black Friday shopping.

Around the world, Black Friday marks the beginning of the holiday shopping season. With a certain air of normality despite restrictions and fear generated by the latest variant detected weeks earlier, shoppers in France were ready to celebrate in full in 2021, ranking third in total Christmas spending in Europe that year. In terms of e-commerce, marketplaces were by far the channel of choice for holiday purchases, attracting more than one-third of French buyers. By offering a seemingly unlimited selection of products in one place, Amazon is the leading online retailer for Christmas gift shopping. Forecasts suggest that more than half of those planning to give Christmas gifts would resort to the e-commerce giant to do so.

Shopping days made in France

The French Days were born in March 2018 as a French equivalent to Black Friday. Launched with the intent to support and revive commerce in France outside the regular sales periods, the event is held twice a year, once in spring and once in autumn. Although retail participation in the French Days declined rapidly after its inauguration, the event saw a recovery in its 2020 edition due to the health emergency. On that occasion, the e-commerce platform idealo.fr registered the highest traffic index three weeks before the shopping days, surpassing the same edition of the two previous years. Another relevant sales season for retailers in France is the traditional "Soldes d'hiver" (winter sales). Every January and February, the event is held to clear out leftover stock from the holiday season, featuring exclusive prices on a wide range of products.
This text provides general information. Statista assumes no liability for the information given being complete or correct. Due to varying update cycles, statistics can display more up-to-date data than referenced in the text.

Marina Pasquali
Research expert specializing in economy and politics
Get in touch with us now
Published by Marina Pasquali, Nov 28, 2022

Key periods for e-commerce in France 2020, by share of sales

Leading e-retailers on Black Friday in France 2021, by search volume 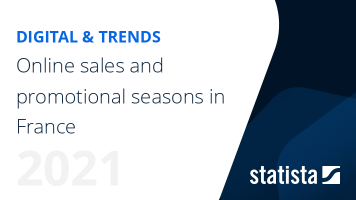 The most important key figures provide you with a compact summary of the topic of "Online sales seasons in France" and take you straight to the corresponding statistics.