Published by
Stephanie Chevalier,
Nov 22, 2022
In the United States, Christmas shopping traditionally begins on Black Friday – the day after Thanksgiving – but, in reality, retailers already start promoting season sales as early as the beginning of November. In 2020, holiday online retail sales in the U.S. amounted to nearly 186 billion dollars, with the most money spent on Cyber Monday. In its 2020 edition, Cyber Monday became the biggest online shopping day in U.S. history, hitting approximately 10.8 billion U.S. dollars in online sales. However, this record was forecast to reach new highs in 2021. In the five-day period from Thanksgiving Day to Cyber Monday, known as Cyber 5, online sales were projected to increase by almost 14 percent compared to the previous year, totaling about 39 billion U.S. dollars.

Like several other industries, the retail sector has witnessed a major digital transformation over the past decade. This gradual shift is especially evident during the holiday season, as an increasing number of U.S. Americans frequent online stores to find the perfect gift for themselves or their loved ones. When asked about their plans for holiday gift shopping in 2021, more than half of consumers said they intended to make their purchases over the internet. Young or old, most buyers in the North American country anticipated purchasing more or as much via e-commerce as they did a year earlier. As for the websites they planned to use, nearly nine out of ten U.S. e-shoppers named Amazon their go-to platform.

Another e-commerce trend that has taken hold during the holiday season in the United States is the early promotion of online deals among retailers. The last quarter of the year usually counts as the most profitable period for retailers in the United States. Therefore, early advertising has proven to be instrumental in tapping into shoppers' buying potential. In 2020, most U.S. shoppers began their holiday gift shopping before December. Behind online ads and promotional emails, social media ranks as the third leading source for introducing shoppers to special deals, making it a high-powered reach channel for marketers. A 2021 survey found that YouTube was particularly influential on holiday purchase decisions of male-identifying U.S. consumers, while Facebook and Instagram were almost equally prevalent regardless of gender.

In the following 4 chapters, you will quickly find the 35 most important statistics relating to "Holiday season e-commerce in the United States". 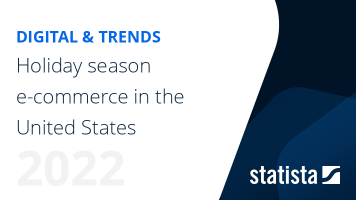 The most important key figures provide you with a compact summary of the topic of "Holiday season e-commerce in the United States" and take you straight to the corresponding statistics.

National holidays in the United States 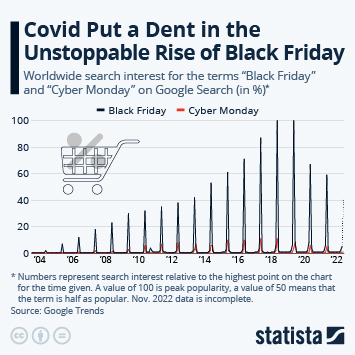 Covid Put a Dent in the Unstoppable Rise of Black Friday 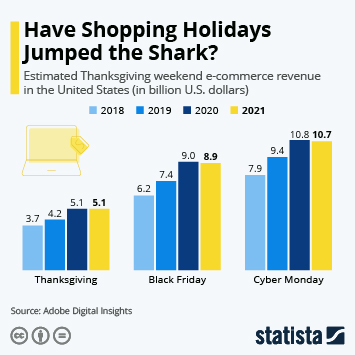 Have Shopping Holidays Jumped the Shark?