In an age where internet users are getting harder to please, audio is making a comeback and has proven to be a strong media format. China has one of the most promising digital audio markets in the world which has just entered hypergrowth phase. Valued at over 31 billion yuan, the Chinese online audio industry was poised to surge further with audiobooks and social audio on the rise. Compared to other major markets, online audio penetration is still relatively low in China. As of 2021, there were 330 million active audio audiences, equivalent to about 30 percent of internet users. Driven by a growing appetite for ear entertainment, the penetration rate was projected to reach 70 percent within the next decade.

The online audio sector, or aptly nicknamed “ear-economy” in China, consists of various content forms from music, internet radio, audiobooks, and podcasts, to new options such as social audio and live voice. Not surprisingly, mobile music has long been a beloved media and entertainment in China. A 2021 mobile user survey showed that slightly over 70 percent of respondents spent 30 minutes to two hours on mobile music every day.

Thanks to their easy access and transportation, audiobooks, predominantly audio drama, have been gaining traction. More and more parents use audiobooks as a teaching tool and audiobook usage was steadily going up among children and teenagers. In addition, digital text-to-audio has been gaining momentum with AI advancements. On the other hand, podcasting is still a fledgling industry in China, given major challenges in content production, RSS technology (an open method to deliver latest web content to subscribers), and limited directories. Nonetheless, the number of podcast listeners was set to hit 100 million by 2022, partly accelerated by the COVID-19 pandemic.

Chinese media users increasingly demand alternative auditory experience with social elements. Against this backdrop, the market size of online music social entertainment reached 37 billion yuan in 2021 and was forecasted to surpass 105 billion yuan within five years. Riding on the digital wave is mobile karaoke with one in every five internet users using it to make new friends. Audio livestreaming, live chats, audio-based games are other latest growing phenomena in China.

Winners in the ear time competition

Currently, the top three audio platforms - Ximalaya, Qingting FM, and Lizhi - hold a combined market share of between 75 and 85 percent in China. The former two have scoped out opportunities in the paid knowledge sector and thus, position themselves as the go-to place for professionally generated content (PGC) and professional user-generated content (PUGC). That said, they rely heavily on paid subscriptions and membership fees. Lizhi, however, focuses on the UGC community and profits mainly from virtual gifts, tipping, and advertising. Trading on Nasdaq, the company is also the first audio content operator from China to go public in 2020. Ximalaya’s IPO journey is a bit bumpy due to market volatility. In June 2022, it pushed back its IPO launch in Hong Kong. New entrants in the market included Hongdou Live (audio-based social streaming), Sure (specialized in emotional companionship content), and Dedao (audio courses).

For many Chinese city dwellers, audio listening has become a daily routine. While some come for new friendships on audio platforms, many more saw it as a medium to cope with stress and loneliness. Audio consumption usually peaked during commute, bedtime, and parenting time. When it comes to on-the-way usage, car driving and on foot were more common than during flight time. Most users access audio services via smartphones, while smart speakers and in-vehicle audio systems have been gaining popularity. To draw users’ attention away from short videos and other media formats, audio content creators will need to satisfy urban audience’s itch for individualized, niche information, and audio service providers will need to streamline their tech infrastructure.
This text provides general information. Statista assumes no liability for the information given being complete or correct. Due to varying update cycles, statistics can display more up-to-date data than referenced in the text.
Lai Lin Thomala
Research expert covering Greater China
Get in touch with us now
Published by Lai Lin Thomala, Aug 16, 2022 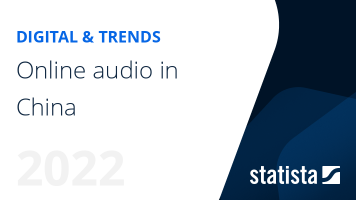 The most important key figures provide you with a compact summary of the topic of "Online audio in China" and take you straight to the corresponding statistics.