User-generated content (UGC) refers to a variety of media such as Wikis, question-answer databases, digital video, blogging, podcasting, forums, review-sites, social networking, social media and mobile phone photography. User-generated content has gained in popularity through social media and content-based sharing sites such as Buzzfeed.
A well known and still frequently used example of factual user-generated content which is collaboratively edited online is Wikipedia, which has millions of contributors worldwide. In additional to traditional Wikis, internet users upload information and post comments at increasing and frequent rates to a variety of different platforms such as social networks Facebook and Twitter or forum communities like Reddit. Photo sharing is one of the most popular content creating activity. Photos, including selfies and pictures of friends and family, are a popular form of content shared on social media among teens and young adults in the United States. One of the most popular photo editing and sharing apps is Instagram with 1 billion monthly active users as of June 2018 and Snapchat with 203 million daily active users as of the second quarter of 2019. As of August 2018, 62 percent of U.S. adults had taken a selfie and uploaded it to a social media website.

Product reviews are also a leading content creating activity. Local business review website Yelp had 177 million reviews in 2018 and as of July 2019, book review platform Goodreads had 90 million reviews. Other popular types of online reviews include business reviews for restaurants and cafés, followed by ratings of doctors, dentists and general shops.

Apart from photos, video has also become a popular platform for internet users to generate and share content. As of December 2018, videos regarding people and blogs accounted for 32 percent of YouTube video content and approximately 19 percent of video views on the platform. The average people and blog video on YouTube was 8.4 minutes long, shorter than the platform average. The hours of video uploaded to YouTube has been increasing at a steady clip, reaching 500 hours of video uploaded to the site per minute as of May 2019. Unsurprising perhaps, as a survey from October 2018 revealed that 49 percent of U.S. internet users had uploaded or shared a video or photo online in the last month.

Mobile has been proved a fruitful ground for the increasing use of mobile social video apps. User-generated short clips are immensely popular content - platforms like TikTok, Snapchat, or Instagram Stories have enabled users to record short clips that can immediately shared with friends of followers and there are countless social media accounts dedicated to reposting user-generated content from other platforms.
This text provides general information. Statista assumes no liability for the information given being complete or correct. Due to varying update cycles, statistics can display more up-to-date data than referenced in the text.
Published by S. Dixon, Feb 8, 2022

Share of U.S. internet users who have shared posts by other users on social media as of 2022
35%

Social media activities in the U.S. 2022

Share of U.S. internet users who have posted pictures or videos on social media as of 2022
41%

Social media activities in the U.S. 2022

Number of user reviews and opinions on Tripadvisor worldwide 2014-2021 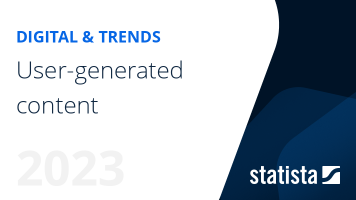 The most important key figures provide you with a compact summary of the topic of "User-generated content" and take you straight to the corresponding statistics.