Pinterest is an image oriented social media platform founded in 2009 and headquartered in San Francisco, California. The social curation site enables users to discover and save images, or ‘pins’ with which ‘pinboards’ can be created. Pinterest has introduced the ability to save GIFs and videos, however, it remains principally a type of search engine for images. Popular themes on Pinterest include recipes, DIY, fashion, and lifestyle.

As of January 2022, the United States was indisputably the country with the largest Pinterest audience size, with a total of 86.35 million users. Brazil ranked in second position with 27 million users, followed by Mexico and Germany. When measuring by the amount of monthly active users, Pinterest ranked 14th in terms of the most popular social media network worldwide as of January 2022. The image sharing service ranked ahead of Twitter and Reddit but fell far behind social media giants Facebook, YouTube, WhatsApp, and Instagram. Furthermore, Pinterest finds its popularity amongst women between the ages of 25 to 34 years.

Due to Pinterest's design of being a visual search engine as well as a social media platform, it generates a substantial amount of web traffic. In June 2021, there were around 1.1 billion visits to Pinterest.com, making it one of the most visited sites online. Additionally, YouTube.com accounted for 26.39 percent of social media referral traffic to Pinterest.com, followed by Facebook with 23.23 percent. When considering the unique concept behind Pinterest, usage frequency differs from most social media platforms. Overall, Pinterest is much more likely to be used monthly, with just 18.6 percent of Pinterest app users having accessed the platform daily in 2021.
This text provides general information. Statista assumes no liability for the information given being complete or correct. Due to varying update cycles, statistics can display more up-to-date data than referenced in the text.
Published by S. Dixon, Apr 7, 2022 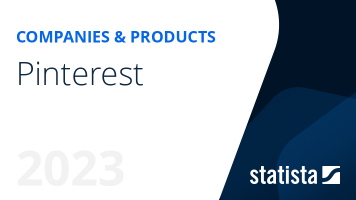 The most important key figures provide you with a compact summary of the topic of "Pinterest" and take you straight to the corresponding statistics.