Interest in local foods in the United States has risen rapidly in the last years as the “locavore” movement continues to sweep the nation. Consumers cited several reasons for preferring local brands, but the majority said they prefer them for a better price/value and a positive experience with the brand. U.S. consumers also indicated to look for product labels claiming to be "locally grown" during their shopping trip.
According to a recent survey, over 42 percent of American aged between 50 and 64 stated that they prefer buying locally grown food products. This figures decreased to 33 percent for 18 to 29 year olds. When asked how often they eat locally grown foods, over a fifth of U.S. consumers stated to eat local food twice a week. Another survey found out that 58 percent of consumers are somewhat satisfied with healthy food options available in their local stores and restaurants.

Meanwhile, the term “local” remains subjectively defined. In a consumer survey, some 96 percent of shoppers felt that a product must be grown, produced, or processed within 100 miles of where it is sold to be considered “local”, while a large share of respondents would consider any product produced in the same state worthy of the title. Definition aside, buying and eating local food is important to many modern shoppers in their selection of a primary grocery store.
This text provides general information. Statista assumes no liability for the information given being complete or correct. Due to varying update cycles, statistics can display more up-to-date data than referenced in the text.
Published by Statista Research Department, Nov 12, 2021

Most common reason for buying local foods in the U.S.
Freshness

Consumers' preference for local and global brands worldwide 2015, by category 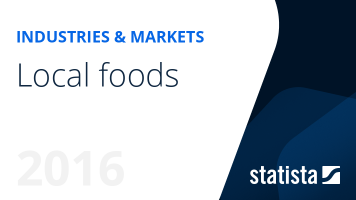 The most important key figures provide you with a compact summary of the topic of "Local foods in the U.S." and take you straight to the corresponding statistics.