While advertising in India is already a billion-dollar-industry, the digital advertising segment under its umbrella has emerged as one of the fastest growing in the world. Indeed, the current market trends indicate that digital advertising seems ready to take over print with respect to the market share in the coming years. Even then, traditional mediums like print and television still hold a position of strength in the country today earning robust revenues.
A major factor for the growth spurt of digital advertising in India is the rapid penetration of mobile devices along with internet connectivity. India has the lowest rates for mobile data across the world, while also catering to the second-largest smartphone market in the world. Naturally, Indian advertisers are leaning more towards digital with each passing year. The digital advertising industry was forecasted to continue growing at a compound annual rate of 29 percent between 2021 and 2023.

The real push for digital advertising came due to the increasing popularity of smartphones in the country. A vast majority of Indians primarily use mobile phones to access the internet and various social media. As such advertising budgets are progressively catering to mobile-friendly formats, with the goal of improving their user interface and experience designs. Estimates suggest that ad spends on mobile media were expected to take up 78 percent of the total digital media expenditure by 2023, from 75 percent in 2021.

Even then, India is still at a relatively nascent stage of digital advertising. In 2020, 62 percent of all digital media ads were bought through direct manual channels compared to programmatic purchases. Programmatic advertising uses a software or algorithms to purchase ad inventories instead of the traditional route of human negotiations usually involving ad agencies. In just one year since, the gap between programmatic and direct advertising in India had closed in with 40 percent of purchases made via programmatic routes in 2021. However, such technological developments also come with their own set of risks. As of 2019, India had the highest ad fraud rate worldwide with respect to its programmatic advertising. Improvements in audience analytics, along with a better focus on ad fraud detection and data privacy is the need of the hour in order to fully integrate digital advertising as a valuable element in the country’s advertising pie.
This text provides general information. Statista assumes no liability for the information given being complete or correct. Due to varying update cycles, statistics can display more up-to-date data than referenced in the text.
Tanushree Basuroy
Research expert covering India
Get in touch with us now
Published by Tanushree Basuroy, Jul 28, 2022 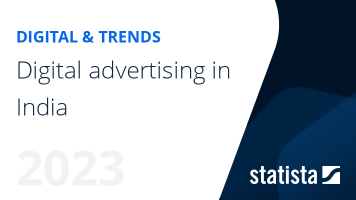 The most important key figures provide you with a compact summary of the topic of "Digital advertising in India" and take you straight to the corresponding statistics.